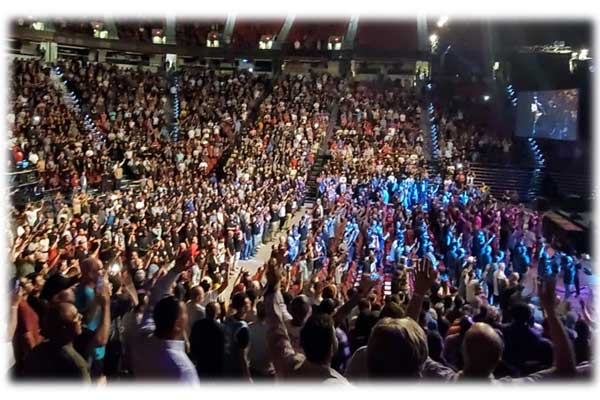 “But you are a chosen people, a royal priesthood, a holy nation,
a people for God’s own possession, to proclaim the virtues of Him
who called you out of darkness into His marvelous light.”
(1 Peter 2:9)

Praying you stayed firmly grounded this week “in” Christ.
If you read Bill McCurine’s letter sent to you on Easter Sunday “A Different Easter Story” (see attached), you will remember him saying that “Jesus flung wide-open the doors of heaven for wretched sinners.” What does that mean?  Well it’s part of the Gospel.  As Bill said we are “wretched sinners,” separated from God, deserving His wrath due to our sin that MUST be punished by death.  But ….. Jesus died on the Cross in my place and all our sin was placed on Him.  Remember what Jesus said to Martha at the tomb of her brother Lazarus:   “I am the resurrection and the life. He who believes in Me, though he may die, he shall live. And whoever lives and believes in Me shall never die. Do you believe this?”  (John 11:25-26)  The key phrase is, “Do you believe this?”  If you haven’t ordered the new Steps To Peace With God, please consider it.  Such a great booklet to easily walk a person through the Gospel….. seeing that we are sinners…… willing to repent and then to make the same statement that Martha did: “Yes, Lord, I believe that you are the Christ, the Son of God …….”

Last week (E² Vegas.org/Friday-Mens-Group-4-15-22) I mentioned that when Christ comes to reside in you after you invite Him to take full control of your life, you not only get Jesus, but you get all THREE:  The Father, The Son and the Holy Spirit.  A buddy of mine in Montana sent me the verses to verify this.  Make sure you keep the attached PDF (God, Christ and the Holy Spirit Indwells Believers) and go over these verses with your family and friends.  It’s absolutely amazing and jaw-dropping! 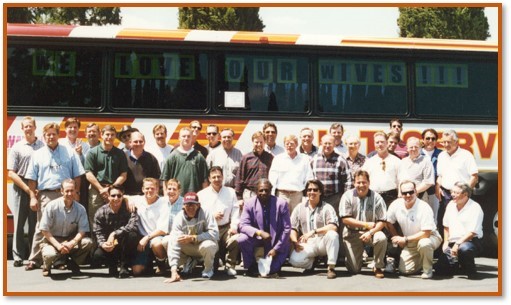 Holy moly, where do I begin.  When I first heard about this Christian men’s conference being organized by the NFL Quarterback for the Las Vegas Raiders, Derek Carr, I said to myself, “not interested.”  Then a dear brother that I have co-labored with for many years right here in LV called me and said he was putting together a group of guys and asked if I would be part of it.  With prayer and the gentle nudge from my wife, I said “yes.”  Thinking it was going to be like a PK Conference (Promise Keepers), I again said, “been there, done that.”   By the way, here is a bus load of men we took down to the LA Coliseum in 1995:

To say the least, I didn’t have the best attitude walking into the Altar Conference (2) weeks ago today.  So what happened……. Over those two days I found myself repenting for my less than godly attitude, not once, but (3) times!  Before I touch on that, here is a short video I took on Friday night of the men Singing Amazing Grace. (YouTube 23 seconds)

The wrist band we were given upon entering the event had the verse 1 Peter 2:9 printed on it (see verse above).  Along with Ephesians 4:11-12, 1 Peter was one of the key verses for our E2 Conference last August: “Whose Job Is the Ministry.”  That verse in and of itself says volumes if believed and put into action.  I also found out that men came in from all over the country to attend this conference…… they made the effort with the desire to be better men.   The guys that were speaking is probably the most critical element.  This is where I had my greatest surprise.  Some of the men were sharing some very tough messages.  A guy by the name of David Platt, spend most of his time in Revelation, Chapters 19-21.  He went into detail on Rev 20:10 “And the devil who deceived them was thrown into the lake of fire and brimstone, where the beast and the false prophet are also; and they will be tormented day and night forever and ever.”  At the beginning of his talk he spoke about false converts in the church then used the rope analogy that he borrowed from Francis Chan (similar to the Hair and the String).  By the way, David Platt was the person that was very instrumental in the production of the movie, “The Insanity of God”  The trailer begins with: “90% born in the church, raised in the church, saved in the church, married and buried in the church, will never share Jesus with another person.”

The other speaker at this conference whose talk was very hard-hitting:  John Bevere.  He opened with a 4 ½ minute video you have to watch: Justin and Angela. After you watch it, John Bevere asked, “How many would like to be married to her?  She still has a divided heart.  Do you think that Jesus is coming back for a bride like that?”  His point to the men was have you given up your old sin (or to the YouTube analogy: boyfriends)?  He emphasized how important “repentance” is and addressed the various verses from Jesus’ own lips like Luke 13:5 “I tell you, no, but unless you repent, you will all perish.”  He also said that “Altar Calls” have created a bunch of Angela’s because there is NOT one word of repentance.  He said that one of the greatest disservices in the American Church today is the Sinner’s Prayer!  It’s worthless if I’m still holding on to all my idols.  He explained the following verses: 1 Cor 6:9-11 and Matt 7:21-23  [Note:  Very few churches touch those two verses]  There were a lot of pastors at this conference.  I wonder if they are going to adapt their messages in the future?

By the way, I actually missed John Bevere’s talk, because I was outside talking to a plumbing contractor that has a ministry to kids that attend Rave Concerts, like the EDC (Electric Daisy Carnival). I talked to him for a couple of hours….. what his ministry does is amazing…. I repented again.  More on that at a later date.  Anyway, I pulled up John Bevere’s talk on YouTube and took 3 pages of notes.

I apologize for being so wordy on this Friday letter.

Men:
As we get older, “Resist the urge to exit the battle and enjoy the good life. That is NOT part of the plan of God.” 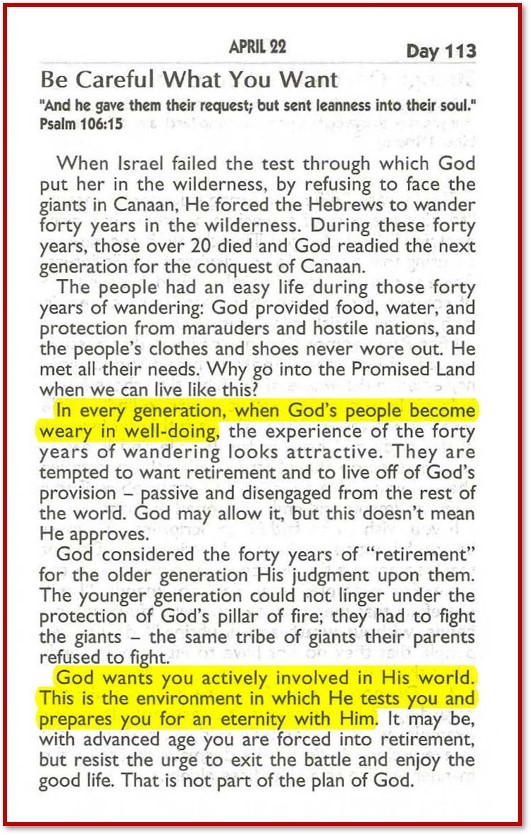 Men:
I am including this devotional because of all the issues we are seeing in the Christian Church today, especially with those in leadership positions.  When you preach God’s word, pray that your audience sees the “Living Word” and not you.  I also noticed a bit of self-promotion at the Altar Conference….. dangerous!  When we seek accolades from man, we are glorifying the worm!  “Whoever exalts himself will be humbled, and whoever humbles himself will be exalted.” 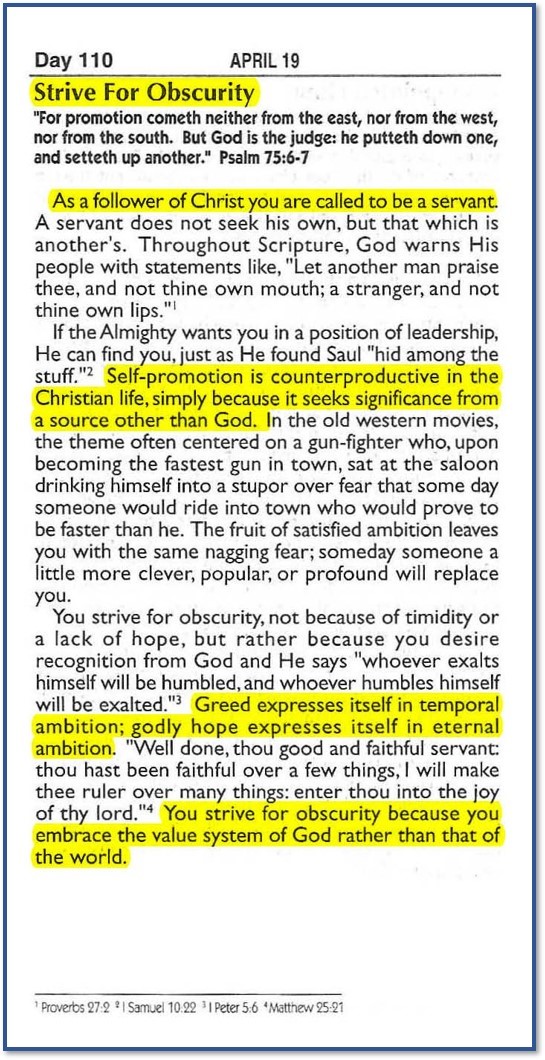 Dear Pastor . . . Rely on Your Congregation in Ministry
By D. A. Carson and John Woodbridge

“Why do laypeople frequently not assume their God-given roles? Often we clerics are to blame……. we have simply neglected to teach them about their position and functions in the church as spiritual priests. We have failed to lead them to the joy of discovering what their spiritual gifts are and how to exercise them.” 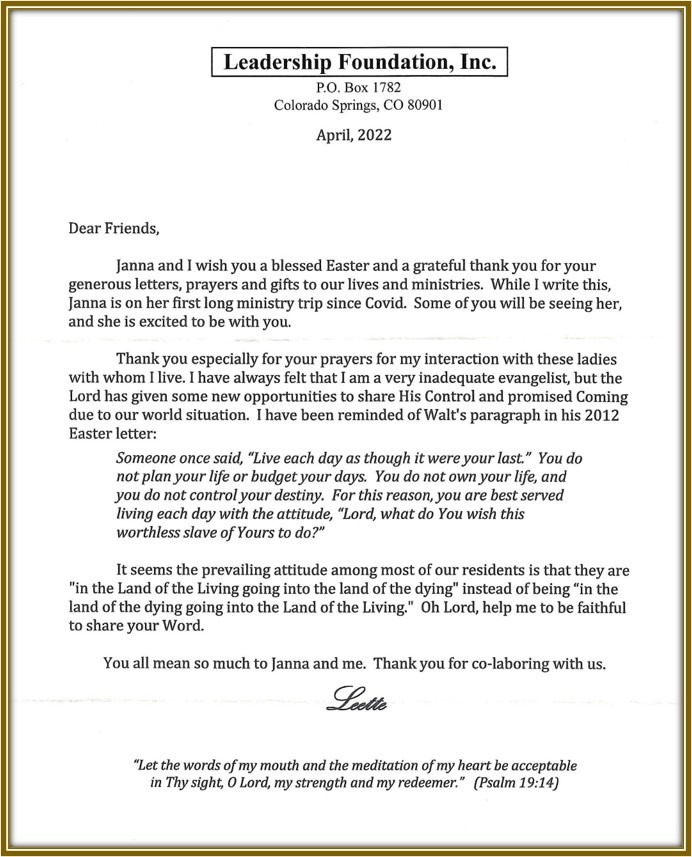 Are you satisfied with Mud Pies? 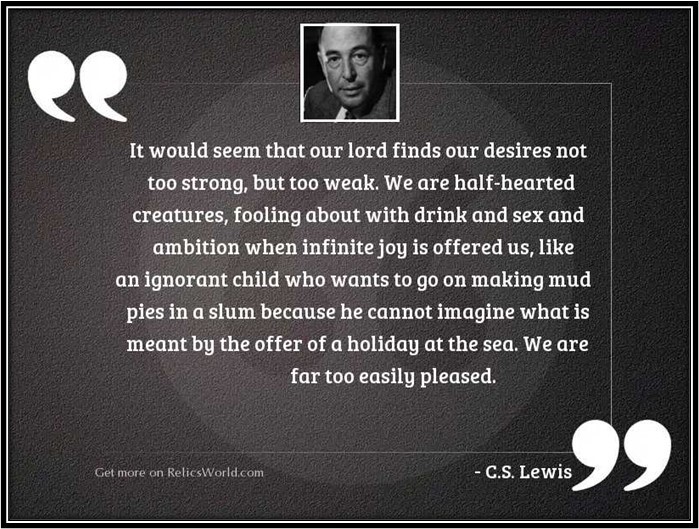