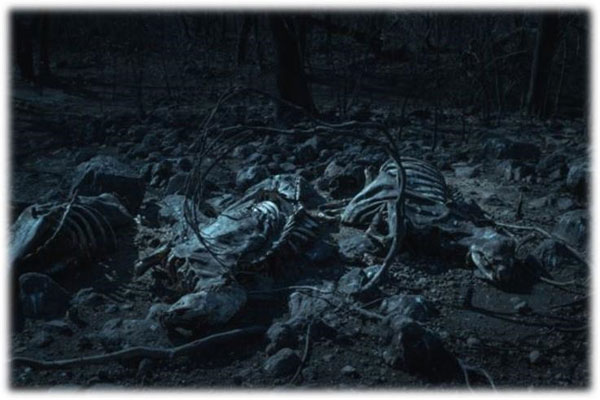 Some trust in chariots and others in horses,
but we trust in the name of the LORD our God.
Psalm 20:7

Well………How was your time “in” the Lord this week?   “But by His doing you are in Christ Jesus, who became to us wisdom from God, and righteousness and sanctification, and redemption”  (1 Cor 1:30)  What does that verse mean to you?

PHOTO ABOVE
I’ve been married for over 40 years to a wonderful gal who has a passion for horses. Actually, Jane trained dressage horses and gave riding instruction to woman (young and old) for many years. 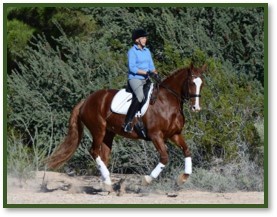 We still own 2 dressage horses that she rides during the week.  One of them, Dream Boy #2 (I’m Dream Boy #1 😊) is a big guy, about 17.2 hands tall (see photo at left of Jane on Dream Boy #2).  Growing up, our boys saw their mom working with horse and rider during part of the day.  Needless to say, they spent a lot of time outside which was a huge blessing.

I debated for some time if I was going to use the photo at the top, but it just kept coming to mind.  Depending on a person’s affinity to animals, that photo will evoke a range of emotions.  Whether it be cats, dogs, horses, etc., when something happens to them, it can be very traumatic because often they almost become part of the family.  I don’t know the full story behind the above photo, but is was taken by photographer, Jeff Frost, as he took shots of the California fires.  The one above shows the devastation of what fire can do……. The charred remains of (3) horses that didn’t survive.

So what’s my point?  I’ve been thinking just how fragile this life is.  It takes very little to set off a chain of events that can be devastating.  Most fires start from one spark or a lightning bolt, most wars begin from a land grab or just one police incident involving just a few people can a set ablaze an entire country against each other destroying lives and property in it’s wake.  These things are upsetting, but it’s nothing new.  When I read 1 Chronicles 18:4 years ago, I said …. “What the heck!”  Here is the verse:  “David took from him (King Hadadezer) 1000 chariots, 7000 horsemen, and 20,000 foot soldiers.  David also hamstrung all but 100 of the chariot horses.” When you hamstring a horse, it’s crippled for life; it will never pull a chariot again.  It’s interesting to note that in the next verse (v. 5), David kills 22,000 Arameans.  All these things I have just mentioned are perfectly orchestrated by God.  We must never forget as we have said many times before, there are only two things that will pass into eternity, (1) God’s Word and (2) People.  Everything else will burn.  Over the years, Jane would share observations while working with her horse clients.  With some, their horse became the most important thing in their life.  It was their reason for getting up in the morning.

Take a quick self-evaluation:  “What do you think or talk about most during the course of a day?”   Is it our countries leadership, a senseless war, your job, money, possessions, March Madness, golf, people who upset you, the media, your health, etc?  Brother Lawrence who wrote the book, The Practice of the Presence of God, knew God could rectify the situation in a moment if He willed it…… he didn’t allow himself to become greatly concerned.

We need to have the mindset of Jonathan Edwards when he said, “Lord, stamp eternity on my eyeballs.”  Like we said recently, time is short….. Jesus said, “If anyone desires to come after Me, let him deny himself, and take up his cross daily, and follow Me. For whoever desires to save his life will lose it, but whoever loses his life for My sake will save it.”  (Luke 9:23-24)

Let’s commit to lose our life for His sake

Men:
Our Friday Group is currently reading, God Has A Wonderful Plan For Your Life ……  The Myth of the Modern Message

(See our Friday Men’s Group 1/28/22 email for more information )  Even though this book was written 12 years ago, it is even more relevant today!

Question:  How many times have you heard, “Just invite Jesus into your heart” and you will be saved and your life changed forever?  See the tragic results of “easy believism”  after these 2 devotionals

Can You Be Certain? Part One & Two – Red Book Day 84-85
The purpose of these devotionals is to help you think Biblically 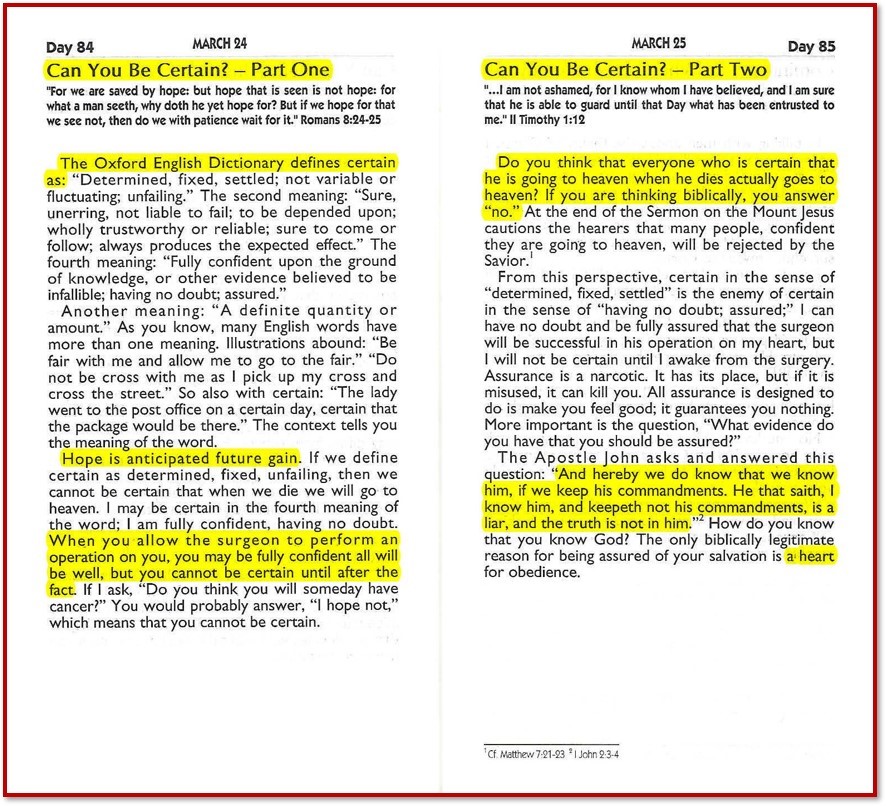 From Chapter 6 of “God Has A Wonderful Plan For Your Life”
Question:  How many of these people below were “Certain” of their salvation after they made their profession of faith?

If we continue to offer the Savior merely as a means of life enhancement, many will respond to the gospel for the wrong motive. To see the effect of neglecting to use the Law to bring sinners to genuine repentance, let’s take a closer look at the tragic results of unbiblical methods of contemporary evangelism. These statistics represent the eternal salvation of human beings. Please read them with the same sobriety you would have while walking through a holocaust museum:

■ At a 1990 crusade in the United States, 600 “decisions for Christ” were obtained. No doubt, there was much rejoicing. However, ninety days later, follow-up workers could not find even one who was continuing in the faith. That crusade created 600 “backsliders”—or, to be more scriptural, false converts.

■ In Cleveland, Ohio, an inner-city outreach brought 400 decisions. The rejoicing no doubt tapered off when follow-up workers could not find a single one of the 400 who had supposedly made a decision.

■ In 1991, organizers of a Salt Lake City concert encouraged follow-up and discovered, “Less than 5 percent of those who respond to an altar call during a public crusade . . . are living a Christian life one year later.” In other words, more than 95 percent proved to be false converts.

■ In 1985, a four-day crusade obtained 217 decisions. However, according to a member of the organizing committee, 92 percent fell away.

■ In his book Today’s Evangelism, Ernest C. Reisinger said of one outreach event, “It lasted eight days, and there were sixty-eight supposed conversions.” A month later, not one of the “converts” could be found.

■ A church in Boulder, Colorado, sent a team to Russia in 1991 and obtained 2,500 decisions. The next year, the team found only thirty continuing in their faith. That is a retention rate of 1.2 percent.

■ According to Pastor Elmer Murdoch, “Chuck Colson. . . states that for every 100 people making decisions for Christ, only two may return for follow-up a few days later. George Barna says that the majority of people (51 percent minimum) making decisions leave the church in 6–8 weeks.”

■ Charles E. Hackett, the national director of home missions for the Assemblies of God in the United States, said, “A soul at the altar does not generate much excitement in some circles because we realize approximately ninety-five out of every hundred will not become integrated into the church. In fact, most of them will not return for a second visit.”

■ In Sacramento, California, a combined crusade yielded 0more than 2,000 commitments. One church followed up on fifty-two of those decisions and could not find one true convert.

■ In Leeds, England, a visiting American speaker acquired 400 decisions for a local church. Six weeks later, only two were still committed and they eventually fell away.

■ In November 1970, a number of churches combined for a convention in Fort Worth, Texas, and secured 30,000 decisions. Six months later, the follow-up committee could find only thirty still continuing in their faith.

■ A mass crusade reported 18,000 decisions—yet, according to Church Growth magazine, 94 percent failed to become incorporated into a local church.

■ Pastor Dennis Grenell from Auckland, New Zealand, who has traveled to India every year since 1980, reported that he saw 80,000 decision cards stacked in a hut in the city of Rajamundry, the “results” of past evangelistic crusades. But he maintained that one would be fortunate to find even eighty Christians in the entire city.

■ A leading U.S. denomination reported that during 1995 they secured 384,057 decisions but retained only 22,983 in fellowship. They could not account for 361,074 supposed conversions. That is a 94 percent fall-away rate.

■ In Omaha, Nebraska, a pastor of a large church said he was involved with a crusade where 1,300 decisions were made, yet not even one “convert” was continuing in the faith.

These statistics are terrifying.  Read about Asahel Nettleton below

I love this stanza on God’s Sovereignty and Man’s Responsibility from the hymn:
I Sought the Lord and Afterward I Knew
by Jean Ingelow (1878)

“I sought the Lord, and afterward I knew
He moved my soul to seek Him, seeking me.
It was not I that found, O Savior true,
no, I was found of Thee.”

MIM Audio of the Week 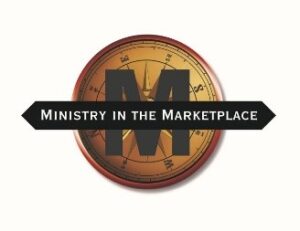 The Veracity of Our Hope

Here is the link:  TexasE2.org/audio 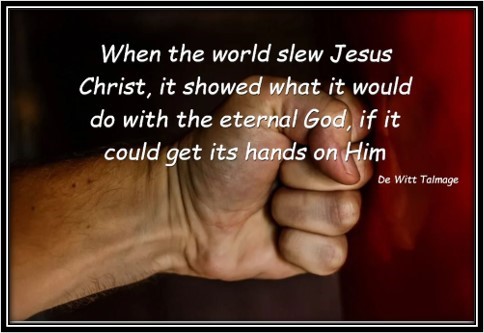