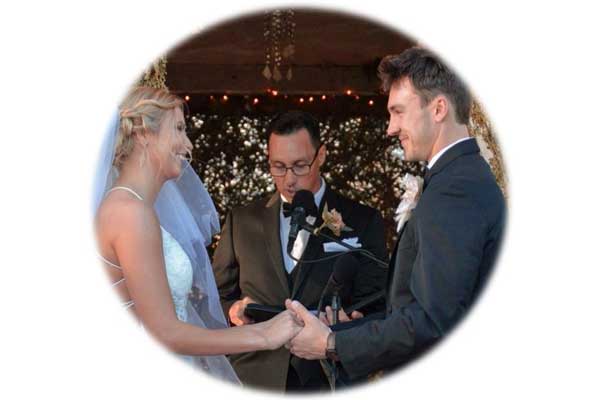 “Now may the God who gives perseverance and encouragement
grant you to be of the same mind with one another according to Christ Jesus,
so that with one accord you may with one voice glorify the God and Father of our Lord Jesus Christ.”
(Romans 15:5-6)

Question:  How much time this week did you reflect on your position “in” Christ.  This is important men! 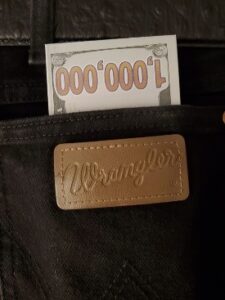 Before I mention the wedding photo above, I wanted to let you know my wife (Jane) and I went to a ☘️St. Patrick’s Day☘️ party last night.  We have been going to it for years and now the hostess of the party, Jane’s dear friend of many years, is attending her Bible Study!  Amazing!  Her friend admitted that growing up in the Catholic church she knew very little about the Bible….. only what the priest said during his short homily.
I didn’t plan this, but I had one of the $1,000,000 packets (it’s actually the Gospel of John) in my back pocket exactly as you see it in the photo at left.  One of the guys behind me asked about the $1,000,000 dollars in my pocket.  Well, that was conversation #1.  I had a total of (4) Gospel conversations and with two of them I shared my testimony……. some amazing comments back and forth to say the least.  They both said growing up Catholic, they were never encouraged to read the Bible and one of the men said he was actually discouraged from reading it.  I ended up giving the Gospel of John to a man that had recently survived cancer and was an atheist.  He admitted that for this type of cancer to be in remission, was nothing short of a miracle.  So you see, St. Patrick’s Day parties are not all green beer and Leprechauns.  Here’s where you can order the Million Dollar Gospel of John (click here).  Check out the YouTube video (2 mins)

FETSIS WEDDING
Ok, what about the photo above?   My dear friend and brother in Christ, Andy Fetsis, invited me to the wedding of his son, Christian Fetsis …. actually Christian invited me since it was his wedding 🙂   Let me cut to the chase.  It was an amazing ceremony and as I observed it, I kept flashing back on the ½ day conference we put on, “Whose Job Is The Ministry?”  [You can go back to some of the past letters and read about last year’s conference: E2Vegas.org/Friday-Mens-Group-8-27-21 ]   Why was I thinking about this past conference during this wedding?  Because it was a beautiful picture of what can take place when we take God’s word at face value.  Remember Ephesians 4:11-12?

The Priesthood of the Believer has been a central concept in the plan of God to reach fallen mankind.  He never intended the ministry to be carried out solely by professional “clergy.”  The main player in God’s program has always been the layman. All believers are in “full-time Christian work.” 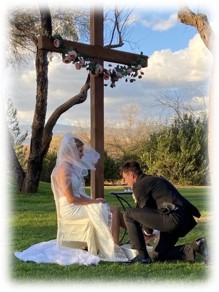 To repeat, the saints are the laymen and the ministry belongs to them.  The pastor’s critically important job is to “equip” the laymen.  So Andy Fetsis was Biblical in officiating his son and daughter-in-law’s wedding.  Andy is not a pastor, but owns a small business….. a layman!  Did you know that in most all states you, as a layman, can obtain a “single ceremony” license to officiate a marriage?  You do not need to be ordained or have an affiliation with a church.  I know of no pastors in my sphere that would encourage a dad, grandfather or dear friend to perform a marriage, baptism, or even a funeral.  Yet, can you see how encouraging this would be for a layman?  It would be a wonderful step in passing the ministry to the laymen and at the same time, freeing up obligations that pastors deal with and allow them to equip (disciple) more men.

Andy Fetsis not only gave a profound and clear Gospel Message at this wedding, but when Christian and Karina participated in communion, it was explained beautifully.  Then Christian and Karina read their tender commitment letters to each other that blew my mind.  To top it off, Christian Fetsis asked his dad to explain the significance of Jesus washing his disciples feet while Christian washed the feet of his wife-to-be.  That selfless act sent chills down my back.  I have never observed a foot-washing at any of the weddings I have attended.  For me….. it was a holy moment!

As I looked around, I saw many young “unmarried” friends of Christian and Karina.  I could only wonder what impact that “Christ-exalting” afternoon had on them.

Men:  “You boast only in the fact that you are a slave of the Lord.”  We play to a party on One!  Get that crystal clear in your mind………
If you ever think that what you have you earned by your hard work………..you are not only prideful, but stupid!

I love the 3rd stanza of the hymn, How Deep the Father’s Love for Us  (Click Here)
I will not boast in anything, no gifts, no power, no wisdom.
But I will boast in Jesus Christ, His death and resurrection.
Why should I gain from His reward? I cannot give an answer.
But this I know with all my heart, His wounds have paid my ransom. 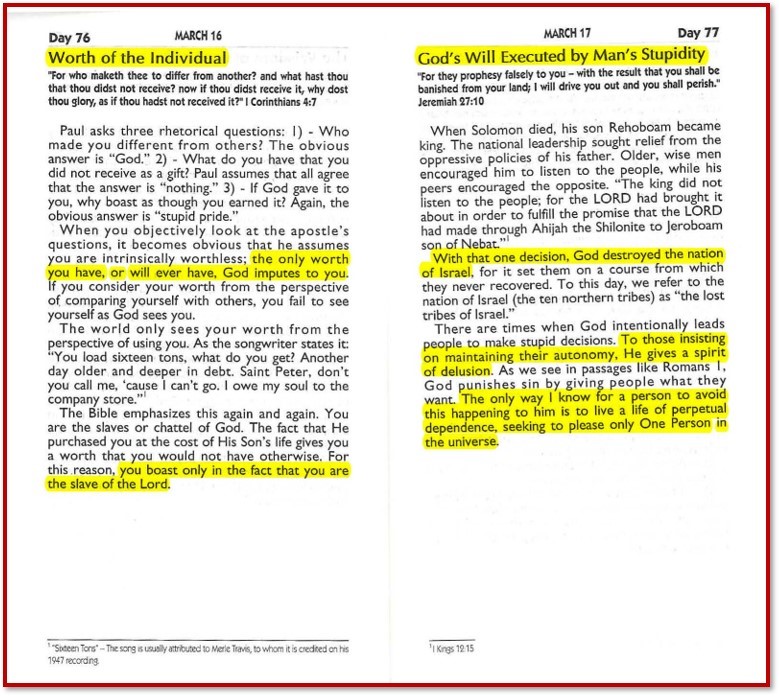 THIS IS IMPORTANT – READ THROUGH CAREFULLY WHEN YOU ARE NOT RUSHED

Men:
Like Jonathan Edward’s said in one of his many profound quotes, “Lord, stamp eternity on my eyeballs.”  Why would he say that?  If you read his Sermon #15, you would know he deeply meditated on eternity, Heaven & Hell.  We would be well advised to do likewise!  See:  E2Vegas.org/Friday-Mens-Group-2-25-22  (Scroll down until you get to “Do Not Read This”)

I am going to revisit several letters I received several years back.  The first one may be familiar to some of you, “A House of Death.”  Please read it carefully to understand what Walt was trying to convey.  Remember, all of us are headed in this direction…….. 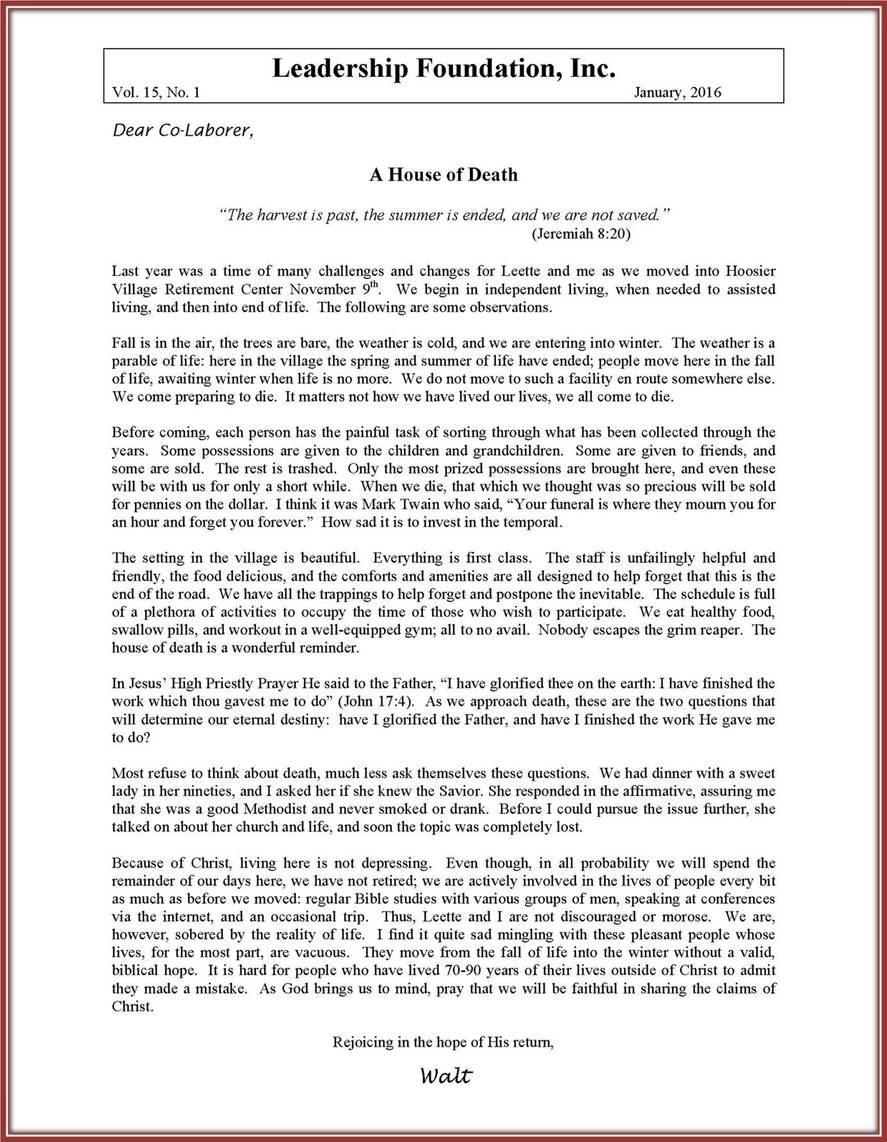 Now read Leette’s Letter she wrote 2 years after Walt’s letter above.  Read it carefully.  Note that Bible Study was new to these ladies in this retirement home even though most had an active church life……. 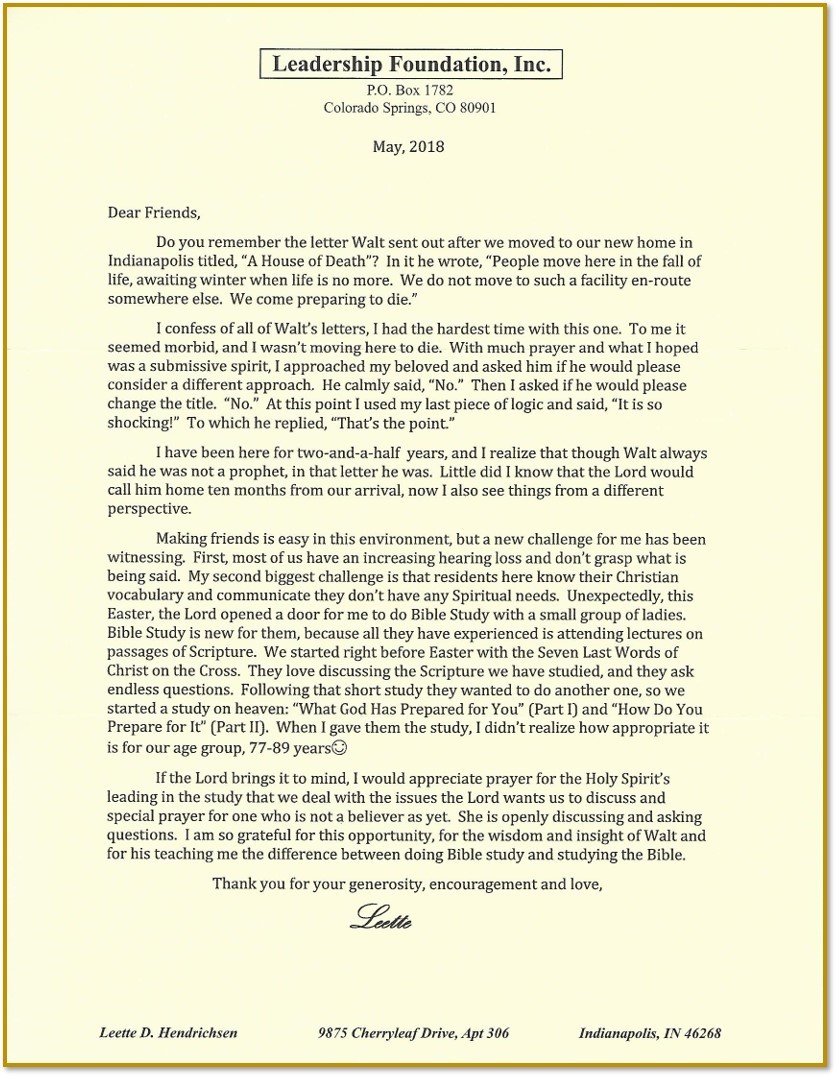 I have included a part of the note that Jane and I received from Leette just last month (Feb).  She is again is talking about the ladies at this retirement home.  She said,

“Most have been church goers all there life and they don’t want to do individual Bible Study.  They will attend a study if the chaplain or one of the many retired resident pastors teach.”

What’s my point and why did I share this with you?

If the churches these retirement home folks came from had the “Whose Job Is The Ministry” model, then both Walt and Leette would have had an  easier time initiating these essential Bible Studies.  How sad to think that they have to be led by a Chaplain or one of the many retired pastors to be legitimate. 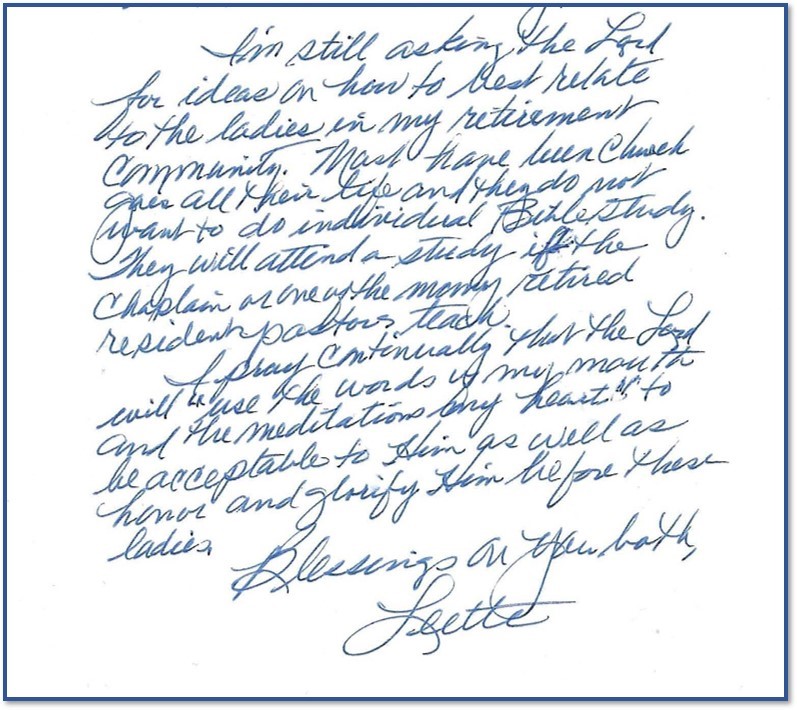