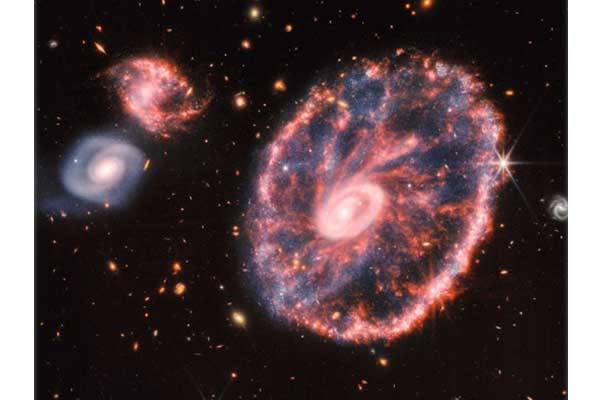 “Therefore, brethren, since we have confidence to enter the Most Holy Place by the blood of Jesus, by a new and living way opened for us through the curtain, that is, His body, and since we have a great priest over the house of God, let us draw near to God with a sincere heart and with the full assurance that faith brings, having our hearts sprinkled to cleanse us from a guilty conscience and having our bodies washed with pure water.  Let us hold unswervingly to the hope we profess, for He who promised is faithful.  And let us consider how we may spur one another on toward love and good deeds, not giving up meeting together, as some are in the habit of doing, but encouraging one another—and all the more as you see the Day approaching.”
Hebrews 10:19-25

“And because you are His children, God has sent the Spirit of His Son into our hearts, prompting us to cry out, “Abba, Father.”  (Gal 4:6)  How about that verse to encourage you guys as you head into this weekend?  Think about it for a moment, the God that created the Cartwheel Galaxy above, adopted us as His children and sent the Spirit of His Son into our wicked and deceitful hearts, which now allows us to cry out, “Abba Father”!  Abba denotes deep intimacy with our true Father.  In some Christian denomination, Abba can also denote reverence for certain patriarchs.  Yet, it would be a very hard word for most of us to say when we think of our earthly dads, because for the most part they were not “abba” material, just broken vessels like us.  I know with my own dad, a hard drinking womanizer, who lost his dad when he was 11 years old, was very tough and never outwardly expressed love.  After I received Christ late one night in my backyard in 1991, I started visiting with my dad on a regular basis.  When I would leave I would hug him and tell him 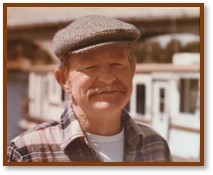 I loved him.  For 8 months of doing this, he was stiff as a board with his arms at his side.  It was only the Holy Spirit that allowed me to continue this.  Then one amazing morning, without saying a word, his arms came up and gave me a hug that almost took the wind out of me!  The silent hugs continued…..  Then 4 months later, after again hugging him and telling him I loved him, my dad hugged me and said just like Astro, the dog on The Jetsons cartoon,  “I ruv roo too.”  I kid not…. That’s the God’s honest truth.  My dad changed that day.  I kept visiting with my dad, we talked about specific Bible verses and discussed sermons he was listening to.  One area that troubled him greatly was trying to understand how God could forgive him based on all the wretched things he had done.   Then the hymn, Amazing Grace came to mind.  My dad was a self-proclaiming pagan, but he did tell me that when he was a young boy in Arkansas, his grandmother took him to church a couple times and remembered that hymn.  I told him the story of John Newton.  Discussing that hymn was a watershed moment for my dad.  One year later on May 5th 1993, my dad desired to be baptized.  He had heartfelt repentance and surrendered his life to Jesus.  He was radically changed.  Shortly after that the Lord took him home.

Wow…. When I started this email, I had no intention of sharing this story about my dad.  May I encourage you, if your parents are still alive and outside the grace of God, never give up on them……. never give up.   Since I took this detour, I might as well insert a photo of my dad……..  Thank you Jesus!

Amazing Grace, how sweet the sound
That saved a wretch like me
I once was lost, but now am found
Was blind but now I see

Was Grace that taught my heart to fear
And Grace, my fears relieved
How precious did that Grace appear
The hour I first believed

As the James Webb Telescope produces more images of our universe, I continue to be overwhelmed with the God that spoke all this into existence and yet resides within us.  Reflect on that next time you “look up” and as the verse in Heb 10:25 above states…… “and all the more as you see the Day approaching.”  You should be grateful that I didn’t include the following verses from Hebrews 10:26-31. Definitely in my Top 5 scariest verses in the Bible!
In the photo above, you are not only seeing the Cartwheel Galaxy, but 2 companion galaxies and a bunch of other ones.  The Cartwheel Galaxy is about 500 million light years away (A short refresher:  To reach it, your truck would have to bury its speedometer traveling 186,000 miles/second and go “non-stop” for 500 million years….. with no potty breaks!).  If you want more details on this galaxy, go to NASA.gov and do a search.
Don’t forget, the MAIN PURPOSE for launching the James Webb is where all these astrophysicists, scientists, etc. are placing their hope:  That we are not alone in this universe. I’ve got news for them, we are not alone because we have the God that created all this, but they would have to drop there autonomous thinking.  Uh-Oh …… that would mean recognizing His existence, repenting of sin, believing in His Son, obeying His commands and enjoying Him forever.  Heaven forbid!

You may have seen the “new” volcanic eruptions on Iceland that 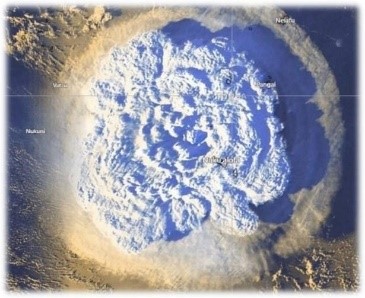 occurred this Wednesday on the Reykjanes Peninsula.  It erupted about a year ago for the first time in 800 years.  I will let you men search the latest on this volcano if interested, but what I really wanted to point out was another volcano, about 10,000 miles south west of Iceland that happened back in January.  I addressed it in a previous Friday letter earlier this year, the Hunga Tonga Volcano: E² Vegas.org/Friday-Mens-Group-1-28-21/. Because the Hunga Tonga Volcano is a submarine volcano (underwater), atmospheric scientists at JPL now know that when this particular volcano blew, with the force of 10 megatons (see photo) it injected an unprecedented amount of water directly into the stratosphere.  They have calculated that it amounts to more than 58,000 Olympic-size pools in the form of explosive steam.  Why is this a big deal?  Because the water vapor will stay in the atmosphere for years and scientists are not sure how all this will effect our weather.  Interesting when you think about what God can do in a “blink of an eye.”  A verse familiar to most of you:

“The One forming light and creating darkness, causing well-being and creating calamity; I am the Lord who does all these.”
Isaiah 45:7

O God, You are my God;
Earnestly I seek You;
My soul thirsts for You;
My body longs for You,
In a dry and weary land
Where there is no water. (Psalm 63:1)

I shared this verse with a few men earlier this week.  I would think that if we took this verse at face value, we would have a much better chance to “walk the narrow, hard way.” By the way, the definition of “EARNESTLY” is: Sincere and Intense Conviction 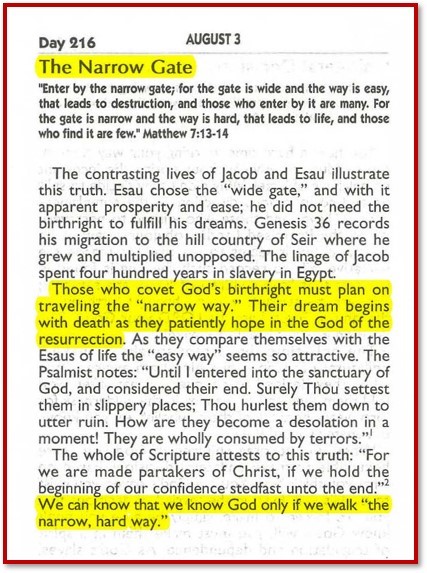 Men:
I encourage you to take a few minutes and read the July Blog that was recently sent by the R12.2 brothers.  This month’s blog is by Lance Gowen, who will be one of the speakers at our Zion Boot Camp Conference.  Lance’s blog is on a subject that is sorely missing in the Body of Christ today:  OBEDIENCE Here are 3 of 13 truths dealing with Obedience from Lance’s blog:

[ Note from the blog team]
Here is the next blog. Most of it was written by Lance Gowen who is a man given to “obeying the Scriptures”.  We have known Lance for years.  We have high respect for his devotion to God and his family and his knowledge of the Word.

We spend a lot of time on obedience in these blogs, but this is a major concept for us to follow during our lifetime in the Scriptures.  God is impatient with the disobedient and the lukewarm people. Read and think on the churches in Revelation 2.  Take those warnings to heart. Yes, God is a God of Grace but also a God of Judgement.

We are praying for you

If anyone would like to attend the 2022 Southwest Men’s Retreat in Arizona,
below is the registration information! 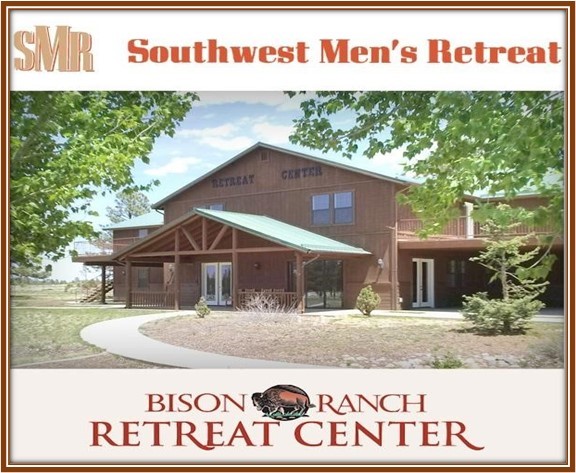 This year’s Theme verse:
1 Thessalonians 5:11 “Therefore encourage one another and build up one another, just as you are also doing.”

We Look Forward to Seeing You There!

Picture a modern eight lane highway with scores of high speed cars cruising with ease down its expansive thoroughfare. Unnoticed and off to the side is a crooked narrow path, fraught with hazards that winds its way steeply up the side of the mountain. If you look closely enough you will observe one lonely pilgrim, staff in hand, arduously working his way up its demanding corridor.

Those cruising the highway who happen to notice the path taken by the struggling pilgrim would naturally conclude that such a course is,

Jesus spoke of this path, “Go by the narrow gate. For the wide gate has a broad road which leads to disaster and there are many people going that way. The narrow gate and the hard road lead out into life and only a few are finding it.” (Matt. 7:13,14 Phillips)

Christ’s statement is in league with other “narrow” Biblical pronouncements, “No one can see the kingdom of God unless he is born again… Without holiness no one will see the Lord… Not everyone who says to me, ‘Lord, Lord,’ will enter the kingdom of heaven, but only he who does the will of my Father who is in heaven” …. Jesus: “I am the way and the truth and the life. No one comes to the Father except through me.” (Jn. 3:3b; Heb. 12:14b; Matt. 7:21; Jn. 14:6)

Our natural response is to reject what appears to be truth that restricts. Yet exacting truth can spell the difference between life and death: Remember the erroneous “O” rings related to the tragic destruction of the “Challenger” space craft? Or the 900 sincere but misguided Cool Aid drinkers in South America?

The narrow path could be a teenager who, against extreme social pressure chooses to say “no” to pre-marital sex. Or a businessman who decides against the common practice of padding his expense account. Or a person who refuses to allow into his mind any stimuli that does not meet the high standard of Philippians 4:8: That which is “ true – honorable – right – pure – lovely – admirable – excellent – and worthy of praise.”

The irony is that the narrow path leads to freedom rather than bondage and to eternal life. The alternative path titillates us in the immediate but in the long term proves to be a dead end street of disillusionment and death.

QUESTION:
Which path are you really choosing?

George Whitefield (1714-1770).  This itinerant preacher and evangelist was, like we say in Texas hold ‘em…….. “All In”  Even though he had poor heath, he continued to preach the gospel.  He said, “I would rather wear out than rust out.”  He did just that…… his last sermon was in the middle of a field on top of a large barrel.  He died the following day………….. 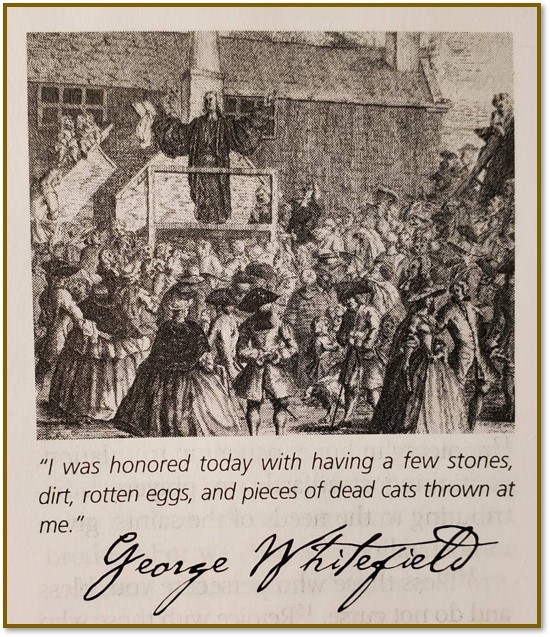