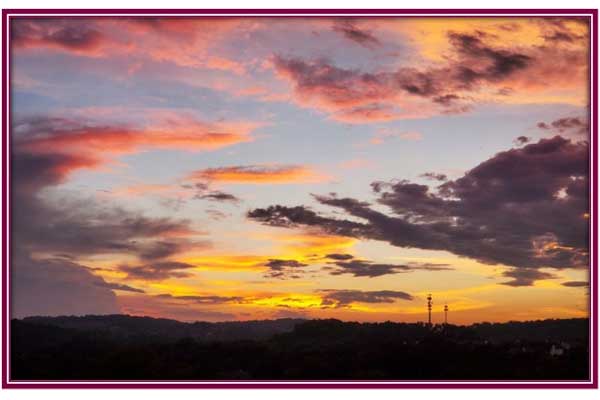 “And then at last the Son of Man will appear in the sky, and then all the tribes of the earth will mourn, and they will see the Son of Man coming on the clouds of the sky with power and great glory. And He will send forth His angels with a great trumpet and they will gather together His chosen ones from all over the world, from one end of the sky to the other.”
Matthew 24:30-31 (Note:  If you don’t know, look up why the
“tribes of the earth will mourn”)

I pray you had a great week and hope you will reflect on these (3) verses as you go into the weekend:

“But God, being rich in mercy, because of His great love with which He loved us, even when we were dead in our transgressions, made us alive together with Christ (by grace you have been saved), and raised us up with Him, and seated us with Him in the heavenly places in Christ Jesus”  (Eph 2:4-6)

I’m getting a later start on my Friday email due to the amazing thunder storm that rolled through the Las Vegas Valley last night.  The PWS (Personal Weather Station) my son gave me detected over 8000 lightning strikes in a 2.5 hour period.  That is wild for Las Vegas!

As you can tell, I’m now home.  It was a great trip as I have previously mentioned and staying with John, Paige and Ezra at their new location in Knoxville was really a good time.  After I departed, John’s brother Mark arrived with his family and stayed the night as they continue to work their way toward Charlotte, NC.

Last week I mentioned our prime directive……. “To seek and save the lost.”  Men, it’s not that complicated….. pray that God would put people in front of you that need to hear the Good News of the Gospel.  One example: 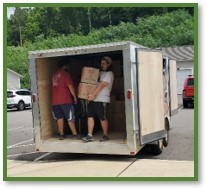 When John & I arrived at his apartment, he had arranged for (2) young men to unload the trailer (ages 22 & 24).  That was a HUGE blessing since the temperature that day was about 94°F and 1000% humidity 😊.  Anyway, after the 2 guys finished and were wrapping up, I went up to them and asked their permission if I could ask them a question.  They both said yes, so I asked them if they had a relationship with God.  One was raised Catholic and the other had gone to church a few times.  I pulled out the Million Dollar Book of John with a Steps to Peace With God tucked in it.  I explained them both and shared a condensed version of my testimony.  They were both so receptive and said they would read both items.  As they were leaving, I told them what a great job they had done unloading the trailer and gave them fifty bucks each.  The photo on the left shows them unloading the trailer.

My flight was delayed an hour so when I arrived at the airport that gave me a chance to relax and have some lunch.  I also remembered to pray and ask the Lord if He wanted me to talk to whoever He places next to me on the plane.  I have to be honest, when I got on the plane after eating lunch, all I wanted to do was rest.  For the longest time, no one had claimed the seat next to me, even though the plane was sold out.  Then right before departure, a family arrived and a young man sat next to me.  The flight was a 4 hour non-stop to Vegas. 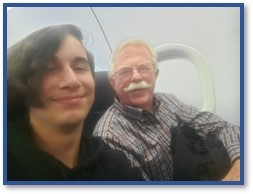 30 minutes into the flight I initiated a conversation.  I was taken aback because this young man was so nice and polite.  Ryan was his name and is 16 years old.  We ended up taking for an hour and a half.  He attends a small church south of Knoxville and is very involved in his youth group.  He shared with me that he is leaning toward becoming a pastor in the years ahead to better serve the Lord.  I complemented him and gently explained that there is no difference between the secular and the sacred / layman and professional.  The only difference is how their ministries are funded.  Ryan was amazed, for he had never heard this before.  I was careful to say that if God was directing him to be a vocational Christian worker, then so be it.  He wanted to know more so I then explained Matt 28:19-20.  We talked about what “making” a disciple means and why there is so little disciple-making in the church today.  I talked about how I had turned my business over to the Lord and told him about my Scouting experience and the India story and resulting lay ministry.  Ryan was super interested and was totally amazed that God put us next to each other.  Of course we talked about so many things and as we were wrapping up, I gave him all the Million Dollar Book of John’s and Steps to Peace with God that I had with me.  He loved them both, especially the Steps to Peace.  He was super impressed how well it was laid out.  Ryan gave me all his contact information and wants to stay in touch. I’ll be sending him a Blue Book and more Steps to Peace.  This was truly a divine appointment.  I was so grateful to the Lord……
Here is a photo that Ryan took. 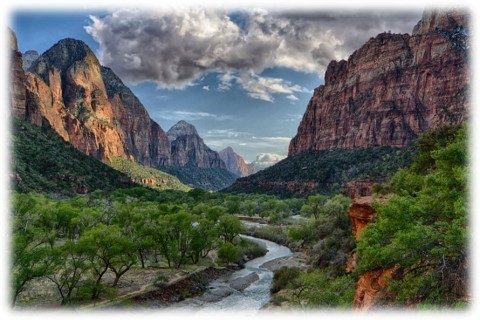 Men:
Two verses that should give us all pause:  “If anyone comes to Me, and does not hate his own father and mother and wife and children and brothers and sisters, yes, and even his own life, he cannot be My disciple……..  He who loves his life loses it, and he who hates his life in this world will keep it to life eternal.” (Luke 14:26; John 12:25) 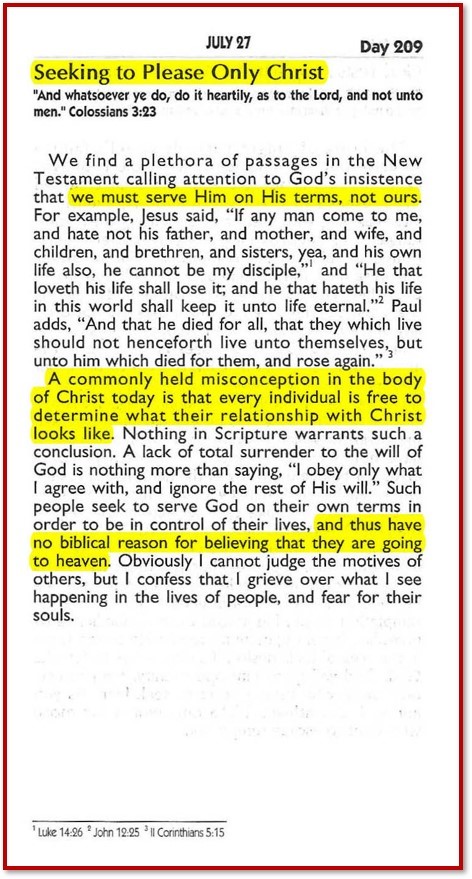 Men:  Does your wife have “a gentle and quiet spirit” toward you? 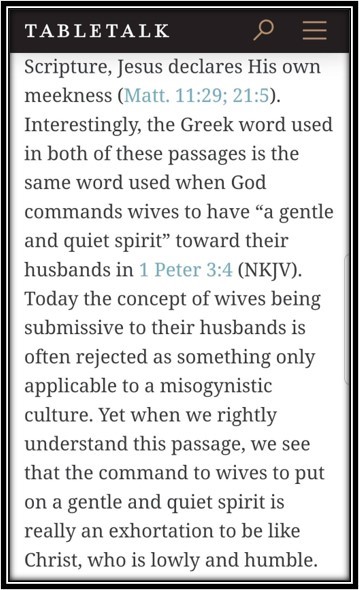 My wife Jane passed this short section from TableTalk to me the other day.  She sent it to a couple of women she has been sharing the word with.

In God’s sight, having a gentle and quiet spirit, is very precious (1 Peter 3:4).  Unfortunately, Jane and I both believe that wives possessing this quality is rare in the times we are now living.  Even though it is a command, it is greatly neglected.  Again, whatever happened to Biblical “Fear of the Lord?”

If interested, you can read the whole article in the attached PDF

Most Gladly!
By Joe Bradley

Life is a journey! It’s often a series of walks through valleys, climbing peaks, descending back into the valley and then repeating.  It’s been said that life is a marathon, not a race. There are several significant life events (this list not exhaustive) that illustrate the challenge of the marathon…here are four:

Have you experienced one of these “life events” recently? Perhaps a series of them within a short period of time?   Are you at a point in your life where it seems to be one “hit” after another? Well, don’t feel like you own the exclusive rights.  None are exempt!

Men:  If you don’t have time to listen to these (2) messages today, make sure to bookmark them for the weekend.  Both are excellent and at the same time, troubling.

MacArthur states states that the LGBTQA+ is not reversible.  I was reflecting with my son on the HR Departments of large corporations that have made these folks part of their policies, think about it……. How would you ever reverse those corporate decisions?

Don Green stated that one of the reasons we are in the situation we are it, is because the church in general “caved in” years ago and we all need to repent.  You don’t want to miss listening to these messages!

Living in a Perverse World
By John MacArthur

For most people, Paul’s words in this passage might seem ludicrous. Rejoice in suffering? Why would anyone in his or her right mind rejoice at the trauma of an accident, the pain of ever-encroaching cancer, the dull agony of a shattered relationship, or the anxiety produced by financial struggles? And yet that is exactly what Paul the apostle said should be true of Christians.

But if we look closer at what Paul says in Romans, we discover that he encouraged Christians to rejoice first of all in “hope of the glory of God” (Rom. 5:2). Here Paul is referring to the future hope that all believers have of one day being in the presence of God. Believers, then, rejoice in suffering because it is one of the steps we take toward maturity (see James 1:2–4) and toward perfecting that hope. One has to wonder if Paul didn’t learn this truth firsthand from a Jewish convert named Stephen.

Stephen was known as one who was “full of faith and of the Holy Spirit” (Acts 6:5). He worked miracles in Jerusalem (6:8) and preached a convicting sermon about Jesus Christ to the Jewish leadership (6:8—7:53). After his speech, when the raging crowd dragged him out to kill him, Stephen looked up to heaven and “saw the glory of God” (7:55)—the same glory that Paul said we joyfully anticipate.

Paul (known as Saul before he became a Christian) was present when, moments later, Stephen was stoned to death (Acts 8:1). That’s when Paul saw firsthand, and perhaps for the first time, the connection between suffering and hope in the glory of God. Paul probably never forgot the image of Stephen talking out loud to Jesus, his eyes riveted on God’s glory even as stones knocked the life from his body.

Rejoicing in the midst of suffering is not easy. This ability is a supernatural gift bestowed upon individuals through the work of the Holy Spirit. The next time you suffer, pray for the Spirit’s help as you seek to persevere and mature in faith through the struggle. That is the right reason to rejoice in difficult times.

God’s Promise:
The more you suffer, the more clearly you will see God by faith.

“For all, death comes like an utterly unsympathetic landlord waving an eviction notice. But that eviction merely releases believers from a wretched earthly neighborhood to an infinitely grand and glorious dwelling in a heavenly neighborhood. Then for the believer, the sorrows, disappointments, and suffering of this life are worse than death. Death releases believers from the relatively dilapidated slum in which they now live and ushers them into a room in the house of the eternal Father in the heavenly city.” 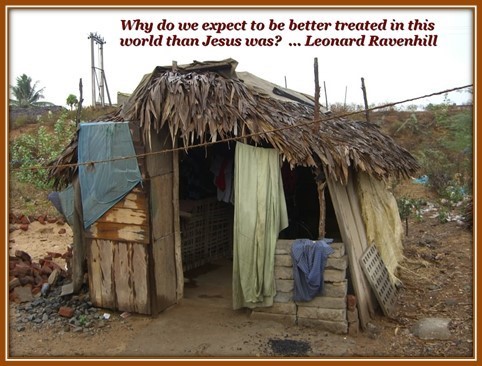