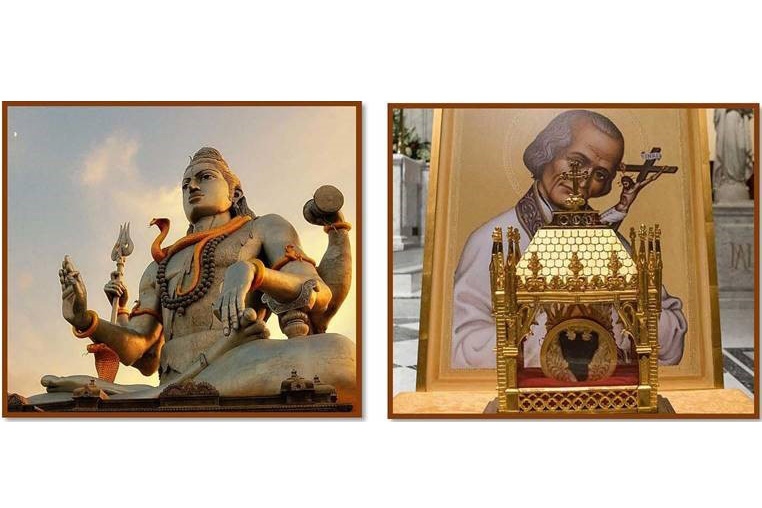 "Do not be deceived; neither fornicators, NOR IDOLATERS, nor adulterers, nor effeminate, nor homosexuals …………. will inherit the kingdom of God."

Well, what’s going on in those 2 images above?  Let’s take them in order.  On Monday of this week in India, they celebrated the festival of Maha Shivaratri, dedicated to the worship of Lord Shiva.  The first image is a photo of Lord Shiva.  As you may know, Lord Shiva is known as the “Destroyer” and part of the “Hindu Trinity” with Brahma and Vishnu.  Shiva is the supreme being that creates, protects and transforms the universe.  Hindus give great devotion to Lord Shiva because he will provide justice (and much more) to those who venerate him.

The second image above is a photo of St. Jean Vianney’s Incorrupt Heart (his actual heart).  It s currently on tour in the United States sponsored by the Knights of Columbus (click here).  St. Vianney is the “patron saint of priests.”  He was born in 1786 and died in 1859 in France.  He was canonized a saint by Pope Pius XI in 1925.  Like Lord Shiva, there’s a lot of information on Vianney.  Here is a good place to start:  https://en.wikipedia.org/wiki/John_Vianney
Large numbers gather to venerate his heart as it is on tour.  By the way, the synonyms for the word venerate from Merriam-Webster are:
adore, deify, glorify, revere, reverence, worship

You might be asking, what this has to do with anything?  As most of you know, I was born a Catholic and I did exactly what the people in that photo are doing.  I prayed, worshiped, asked for favor of many saints and especially the Virgin Mary.  I was so devout to my Catholic religion (that I was born into), that I desired greatly to be a Catholic priest, but years later God had other plans (see attached PDF – Under That Tree).  As a Catholic I was never encouraged to read the Bible.  So basically I was living in the dark until that that day when His Light shined into my dark life.  The first 4 verses of John, chapter 1 speak volumes (click here).  When I went to India for the first time in 2007, the one thing that struck me, was how similar Hinduism was to Catholicism.  They both kneel down and worship idols made of wood, metal, porcelain, etc. Most of these statues and relics were once living people, just like you and me. So in light of this verse, how can we pray,

venerate or ask favor of anything other than to our Triune God?

“For there is one God, and one mediator also between God and men, the man Christ Jesus”
(1 Timothy 2:5)

William Tyndale was strangled and burned at the stake for letting the common people have the ability to read the Bible in English.  This quote by him is so profound!

Since they were “born” into the Catholic Church, I ask them, “Would you have the same dedication and devotion if you were born into a Mormon, Jehovah Witness or Muslim family?”  This is another way where some will loosen their grip and be willing to sincerely look at what God’s Word actually says.

[Click Here]
If you are not using “Steps to Peace with God” I highly encourage you to start.  For those that want to send a link through your email or phone, here is one from BGEA:  https://peacewithgod.net/

Ok, you have had your fill of me.  See you at noon!

PS:  By the way, did you know in the Biblical Ten Commandments that the Catholic Church deleted the 2nd Commandment?

“You shall not make for yourself an idol”