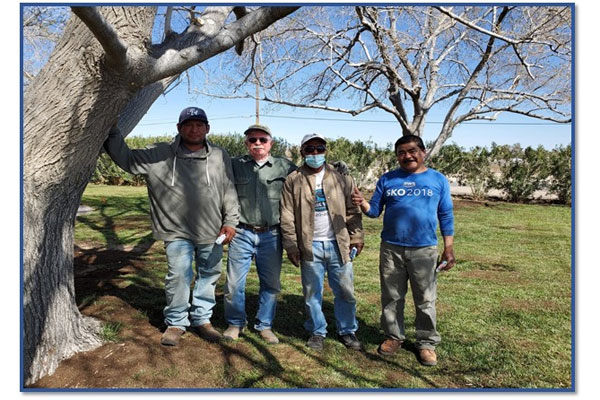 “Do nothing from selfishness or empty conceit, but with humility consider others more important than yourselves.” (Phil 2:3)

I pray you had time this week to rest “in” Christ.

Finally I am tackling my yard.  You may recall, a few months back it was my trees E2Vegas.org/Friday-Mens-Group-12-11-20.  My wife and I have lived in the same house since 1984.  Sometime after WWII, the area we are located in consisted of govt lots.  You could homestead a 2.5 acre lot if you built a 10×10 block structure or put in a well.  For our 2.5 acre piece, we are the 4th owner.  Since Jane and I have decided to stay right here for the time being, we are addressing some areas that need attention, one of which was our lawn.  The previous owner loved his lawn and we do also.  The only problem:  There is 24,000 sq ft of it! 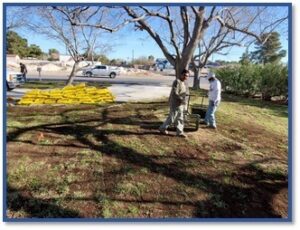 So why am I telling you all this boring stuff (kind of like inviting you over to watch slides of our trip to Death Valley).  It’s because in order to spread 10,000 lbs of manure (200 bags @ 50 lb/bag) I needed help!

By the way, in Philippians 3:8, the Apostle Paul also used the word manure……  He considered all things as “dung” (Gk: skubala) that he may gain Christ….wow!

Back to my hired help.  I was able to get 3 men early in the morning of St. Patrick’s Day.  As I was helping these guys, I was praying how can I have an opportunity share with them.  Only one of them spoke some English, so I asked if I could fix them a late breakfast.  They quickly agreed.  So I got it all prepared and set it up on the back patio.  The one guy that spoke some English was from Cuba and the other two were from Acapulco, Mexico.  I had “Steps to Peace with God” and several similar ones in Spanish.  We had about 45 minutes together and I also shared my testimony of receiving Christ under the tree the guy is leaning on in the top photo.  They didn’t make a commitment to Christ that morning, but were very receptive.  The guy from Cuba, Angel, was very interested to know more about the Bible and our Friday Men’s Group.  I told him about one of our guys, Emir, who is also from Cuba.  Angel asked if he could attend.  I pray he shows up.  Having that time with these 3 men changed the whole dynamics for the rest of the day. 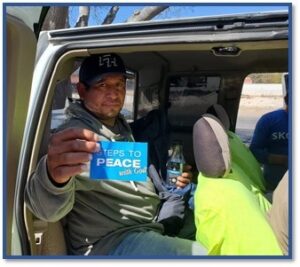 Pray the Lord will give all of us more opportunities in the course of the day to share the only news that delivers eternal hope.

Much Love in Christ,
Dan

“But in your hearts sanctify Christ as Lord. Always be prepared to give a defense to everyone who asks you the reason for the hope that is in you. But respond with gentleness and respect.”  (1 Peter 3:15)

Men:  I received a number of comments from last week on how this 50 minute video impacted them.  If you haven’t taken the time to watch it, I highly recommend it.

If you would like the mp4 of this, just click the hyperlink below and request access from Dave Rice.
Paint the Wall Black The Story of Nini’s Deli

Once in a while from Lee Yih

This is a profound message from our brother, Lee Yih.  It’s very convicting.  “Thank you Lee for sharing this…………….”

I was in Sunday School class recently, watching a video of little kids being interviewed.  They were being asked about their impressions of marriage and what they thought of it.  Of course, they drew heavily upon what they observed in their own homes.

What struck me was when one kid said, “My parents always have breakfast together in the morning, and I see my dad coming over to the breakfast table to kiss my mom.  Another kid was recorded as saying at the end of a longer sentence, “and when you mess up, it’s OK”.  I thought about these and other statements on that program and I reflected on how they chose these comments from what must have been a myriad of recordings.  But the larger point was, little ones pick up on little things, things that we do not realize they are paying attention to, and things that can shape their future lives.

I reflected on my own behavior at home when my little kids were growing up.  Frankly, I never paid much attention to the fact that they might be paying attention and making notes.  Home to me was my safe haven, my castle, and it was the place that I could be myself and just relax.  I never ate breakfast with my wife, and while I was sitting with her at a meal, I cannot remember expressing any love and affection to her in front of the kids (although I could have).  I did think about teaching them things, but besides those things that are taught, I was unaware of the things caught.

I remember when I was first in Walt Henrichsen’s home and it was hard not to notice his outward and purposeful display of affection and appreciation for his wife, Leette.  He would say, “My you look lovely this morning!  or how are you, my gorgeous lady?”  At first, I thought, Good grief, this is a little put on, and I hope it is not for my sake.  Then another time soon after, I noticed the same kinds of things, and months and years later, I realized that this was just the way he was!  Was it put on?  So, what if it was?  It was done in accordance with an injunction out of Eph 4:29 (speak words that are good for edification that it may give grace to those who hear), and this is how God wants us to talk to each other, especially to our spouses.  Eventually, we may even become what comes out of our mouths.  Most importantly, it could influence our kids, (even grandkids) on what a Christian marriage (love relationship) looks like when nobody is looking.

Men, I remember the few times when I visited with Walt at his home is San Diego.  After leaving his home as I walked to my car, I looked back and said on two occasions, “God, I don’t know what I just experienced in that house, but I want it.”  One time Walt and I were visiting at a restaurant down the highway from his home.  He received a call from his son and ended up talking to a couple of his grandkids.  I don’t remember exactly, but while on the phone Walt said things like, “Gitchi Gitchi Goo, I love you!”  I guess I was in shock, because this wasn’t the side of him I had ever experienced.

“One of the marks of people with Biblical hope is, no matter how happy their circumstances,
they would rather be dead than alive” 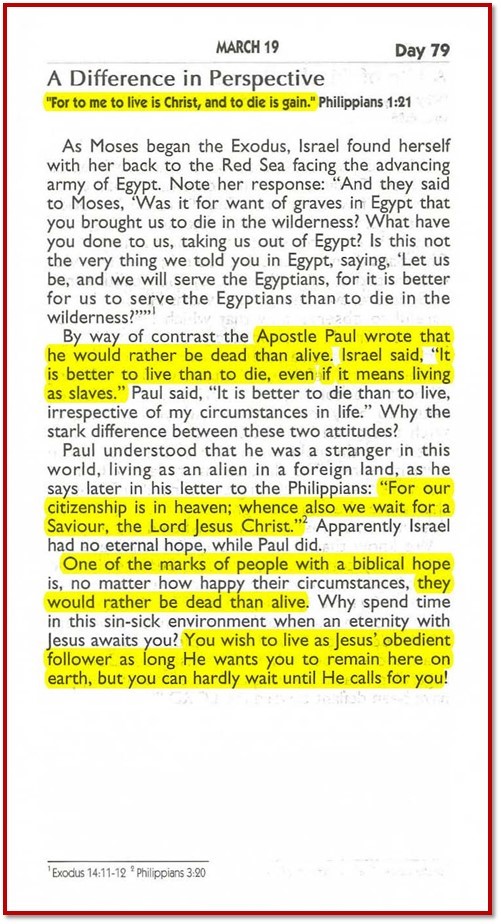 A meditation from our brother, Bill McCurine

ARE YOU A WARRIOR OR WIMP?

Today, we are living in a wilderness of humanistic ideas and ideologies. By that I mean that you have become the designer and authority of whatever you choose to believe. Sadly, many professed followers of Christ are caught up in this confusing mishmash of relativistic ideas and authorities. Let me ask you a question:  Do you want to be able to effectively rescue people out of these demonically controlled ideological strongholds into the freedom of Jesus Christ?  If so, read on!

St. Paul stated, We are human, but we dont wage war as humans do.  We use Gods mighty weapons, not worldly weapons, to knock down the strongholds of human reasoning and to destroy false arguments.  We destroy every proud obstacle that keeps people from knowing God. We capture their rebellious thoughts and teach them to obey Christ (2 Cor. 10:3-5 NLT).

God uses spiritual weapons to engage us in this war of destroying spiritual strongholds. To win the war against Satan’s iron grip, it won’t be done in the conventional manner in which wars are fought. These strongholds are referring to all humanistic, godless belief systems. Lots of folks buy into these false ideas and are taken captive spiritually, unless they hear and respond to the truth.  By destroying these obstacles, we are delivering people from their captivity to false religions, opinions, etc., into the freedom and dominion of Christ. Today we are in a pitched battle for the minds of people who are held captive to deceitful, demonic belief systems that are exalted in opposition to Scriptural truth. (See I Cor. 3:20)

There is only one weapon that can expose and correct these false belief systems, and that is the truth: The sword of the Spirit, which is the word of God (Eph. 6:17).  Spiritual warfare is an ideological conflict fought in the mind by assaulting the proud fortresses of ideas that sinners erect against the truth.  By using the truth of God’s word, we knock down enemy fortresses, release the prisoners from Satan’s domain, and bring them into obedient subjection to the Lordship of Christ. (See Eph. 6:10-18)

QUESTION: The key to successful warfare is proficiency in wielding the word of God against the lies of the Enemy who masquerades as truth.  Just how badly do you desire to be Gods instrument of liberation to the lost? Are you willing to pay the price in terms of sustained, disciplined, and informed study of the Scriptures in order to be equipped as His instrument?  Because that is exactly what it will take.  It is here that the men are separated from the boys; the warriors from the wimps. Which do you choose to be?