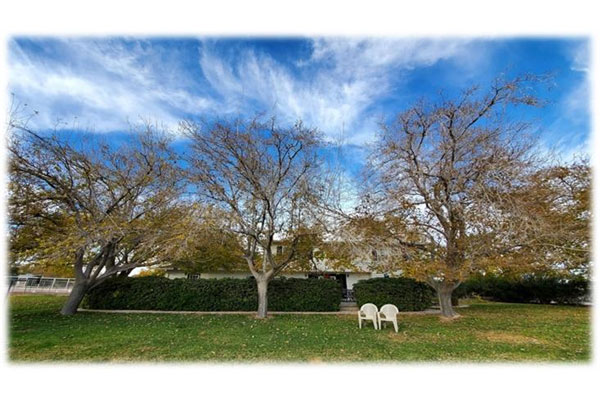 “I am the vine, you are the branches; the one who remains in Me, and I in him bears much fruit, for apart from Me you can do nothing.”  (John 15:5)
“And the axe is already laid at the root of the trees; therefore, every tree that does not bear good fruit is being cut down and thrown into the fire.”  (Matt 3:10)

I pray you’ve had a peace-filled week “in” the Lord as we reflect on the One Incarnate God that came from His throne in Heaven to save those who put their faith in Him.

I have been thinking about trees.  We all love trees.  A few facts:  There are over 60,000 different kinds and most likely we don’t give them much thought. 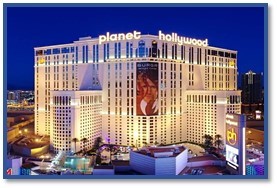 Like my moon comments (Friday Letter 10/16/20) we wouldn’t exist without the moon or trees.  As most of you know, trees remove the CO2   we exhale and return it back to us as oxygen (O2) for our survival (1 acre of trees will provide 18 people with all the oxygen they need for 1 year…… how crazy is that?).  In addition to providing O2 they are amazing.  We hear about rain forests, but what about the trees that produce fruit (pineapples, mangos, apples, oranges, peaches, …..), or the nuts that are harvested (almonds, cashews, walnuts, pecans…..), the wood they provide for furniture, houses, cooking, fireplaces, boats, etc.  If we start talking about the uses of sawdust, wood pulp and cellulose then the list gets really long, from paper to medicine, ping pong balls to paint …… and thousands of other uses.  What about providing for millions of animals, birds, insects, etc.  Some of the largest trees on the planet like the Sequoia have some of the smallest seeds and some like the Redwoods are almost as tall as the Planet Hollywood in Vegas.  Right in our own Sierra Nevada Range are some of the oldest trees in the world…… the Bristlecone Pine, over 4000 years old.

If we research how a tree works, that’s when it gets mind-boggling.  I don’t want to bore you to death, so I will simply point out three things: (1) Study how a seed works (2) Study what goes on underground with its complex factory and nutrient delivery system, then (3) Study the leaf – it has the capability to flawlessly convert the energy of the sun into storable energy in the form of sugars, through the process called photosynthesis.  To make an artificial leaf is one of the Holy Grails of science – some say as impossible to copy as the human brain! 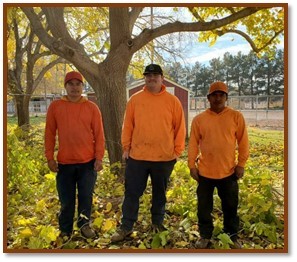 TREES ARE AMAZING, BUT………
So what about that “not-so-special” tree photo at the top?  That is a photo from my backyard taken yesterday.  I finally hired some guys on Wednesday to cut all the dead wood out of my Mulberry trees…. and there is a lot of it!  I figured it wouldn’t be the most prudent thing for me to attempt to do.  As soon as they arrived they were on my mind. While they were having lunch I went out and visited with them.  From left to right, their names are Ventura, Ernesto and Alejandro.  Ventura and Alejandro are from Honduras and Ernesto is from a town NE of where my son Mark lives in Guadalajara.  Only Ernesto speaks a little English.  Please pray for them.  A few weeks back one of our brothers, Tom Wise, gave me some tracts of the Four Spiritual Laws (similar to Steps to Peace with God), but these had English on the left side and Spanish on the right side.  We went through them and Ventura wants to know more.  I will visit with him later this morning as they finish up.  I also sent to each of their phones the link to the Jesus Film in Spanish.  They said they would watch it with their family.  If you don’t have the app for your phone, get it.  It’s now in 1800 languages.  By the way, don’t be intimidated if you don’t speak Spanish, just use Google Translate.  It works great!

As we have said over the years, there are only two things that will pass into Eternity: (1) God’s Word and (2) People.  As I thought about these (3) young men …. how precious are they in God’s eyes compared to my trees?  Even though trees are living miracles, they too will die, get cut down and be thrown into the fire.  But people………. what did God say about them? He said, “The Lord’s portion is His people…….” (Deut 32:9).  This is a jaw-dropping verse.  God could have chosen anything in the Universe to be His portion…… but he choose us!  And because of His Amazing Grace, He could save a wretch like me.

So the next time you have a workman over, maybe you need to stop thinking about the “not-so-perfect” job he’s doing, and ask God to give you and opportunity to share the only Good News he may ever hear from anyone.  In light of Eternity, if that plumber walks out your door knowing Jesus, who cares if your toilet is still leaking? 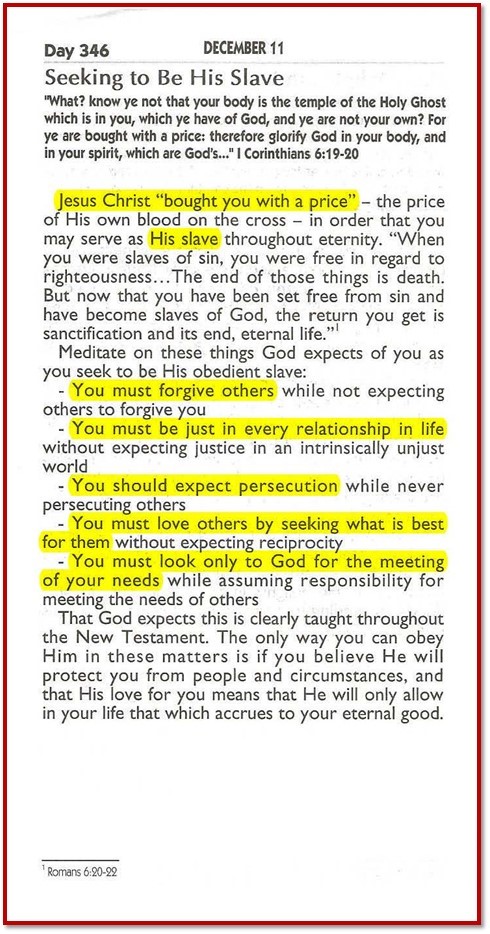 Audio Teaching of the Week:

Contend Earnestly for the Faith  – By Winston Parker (1 hr) – Southwest Men’s Retreat 2020
Men, this is a great teaching.  Make sure you listen carefully when Winston explains John 5:30

We have shared this before, but if you haven’t heard what Penn Jillette said after receiving the Bible, it worth watching!

I love one of the comments:  “Mr Jillette you probably don’t realize this, but that was the best 5-minute sermon most of us have ever heard”

Here is Penn Jillette’s actual blog and a portion of the main narrative below:  https://youtu.be/6md638smQd8

Atheist Penn Jillette is one half of Penn and Teller, a duo that has been headlining Vegas shows for years with comedy and the art of illusion. Penn has never been shy about his disbelief in God, often writing about his conviction in articles and best-selling books. Yet in an on-line video blog that can be found on YouTube, Penn shares a story about the time a gracious Christian businessman gave him a Bible as a gift. Penn goes on to use the story as an opportunity to point out that Christians who don’t evangelize must really hate people. Here’s the direct quote from his video blog:

“……..I’ve always said, you know, that I don’t respect people who do not proselytize. I don’t respect that at all. If you believe that there’s a heaven and hell, and people could be going to hell or not getting eternal life or whatever, and you think that, uh, well, it’s not really worth telling them this because it would make it socially awkward—and atheists who think that people shouldn’t proselytize, [saying] “Just leave me alone and keep your religion to yourself”—uh, how much do you have to hate somebody to not proselytize them? How much do you have to hate somebody to believe that everlasting life is possible and not tell them that? I mean, if I believed beyond the shadow of a doubt that a truck was coming to hit you, and you didn’t believe it, and that truck was bearing down on you, there’s a certain point where I tackle you. And this is more important than that……..”

Facts of the Matter
ARE YOU AN EFFECTUAL LABORER FOR CHRIST? (Part 4 of 6)

In the previous two “Facts” we emphasized that effectual laborers walk with God, possess a passion to know, love and become like Jesus, live among the lost, winsomely and fruitfully engaging and embracing people wherever they are as they verbalize and live out the gospel.

Effectual laborers also know and love the Scriptures, recognizing God’s word to be sufficient in its application to all of life:

CHALLENGE : George Muller (1805 – 1898) stated that “the vigor of our spiritual life will be in exact proportion to the place held by the Bible in our life and thoughts.” God help us, his laborers, to make spending time with the Lord Jesus in the context of his holy word a top priority.

1The core concepts in this six part series are derived from a bulletin from the U. S. Director of the Navigator, March, 2013