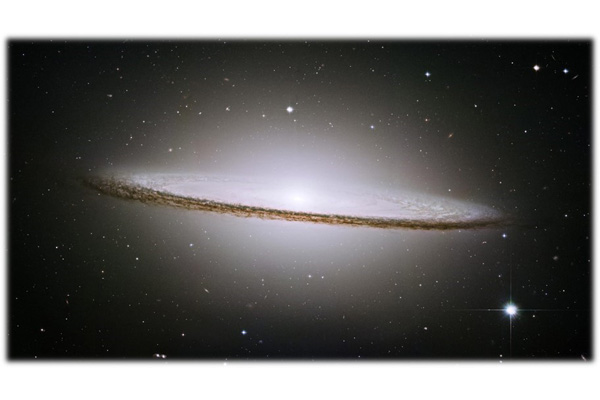 “Heaven is My throne and the earth is My footstool. Where then is a house you could build for Me?  And where is a place that I may rest?
“For My hand made all these things, thus all these things came into being,” declares the Lord.
“But to this one I will look, to him who is humble and contrite of spirit, and who trembles at My word.”
(Isaiah 66:1-2)

I pray you had time to rest “in” Christ this week.  With everything going on around us, that may sound like a tall order.  Yet, we must continually remind ourselves not only who we are, but “whose” we are.  Just ponder for a bit on the words from 1 Peter 2:9………

“But you are A CHOSEN PEOPLE, A royal PRIESTHOOD,
A HOLY NATION, A PEOPLE FOR GOD’S OWN POSSESSION,
so that you may proclaim the excellencies of
Him who has called you out of darkness into His marvelous light.
(1 Peter 2:9)

Now, is that a good word or what!

As you can tell above, I was having “Galaxy Withdrawal” (I wonder if that could be a legitimate addiction?).  Anyway, I have never talked about the Sombrero Galaxy.  It’s one of those galaxies that is just out of eyesight range, but you can see with a small telescope.  From Earth, it is tilted nearly on edge and resembles the broad rim and high-topped Mexican hat.  Very cool!  It’s one of the most massive objects in the Virgo cluster and equivalent to 800 billion suns!  That’s hard to get you mind around……….right?  It’s 50,000 light-years across and 28,000,000 light-years from Earth.  Now think about that for a second……… if you could zip through space at 186,000 miles/second, it would take you 28 million years to reach the rim of that Sombrero.  By the way, the team at Hubble used red, green and blue filters to yield a natural-color image.  It’s one of the larger Hubble mosaics ever assembled.

One of the brothers sent me this.  Check it out:  Universe Size Comparison (5 min)

So what about the verse from Isaiah?  I was on a call this week and one of the brothers on the east coast shared what God was showing him regarding those 2 verses.  I’m not going to detail it, so you can do your own study of it.  Other than knowing clearly that God made the Sombrero Galaxy, He points to (3) words:  HUMBLE – CONTRITE – TREMBLES.  If we just take the word “humble” and do word study of the Hebrew (`aniy) you will find “poor”, “needy”, “afflicted”, “weak”, “depressed of mind”, afflicted…. etc.  You get the picture.  God is “LOOKING” for those that are totally dependent on Him, with a contrite spirit and trembling (fearful, afraid) at His Word.  Only the secure can be humble…… and whatever it takes, remember what Jesus said in John 5:44

“How can you believe, who receive honor from one another, and do not seek the honor that comes from the only God?”

Keep that verse in your front pocket the next time someone strokes your ego or you think you are pretty special.  Apart from Jesus, we can do NOTHING!  We are a bunch of poor, blind beggars!  Remember that….

Note:  In Skip Gray’s book, Insights (page 33), he states, “All it costs to invest in someone else is your life.”  Isaiah 43:4, “I give men in return for you, peoples in exchange for your life.”  Skip Gray discipled many men, including Walt Henrichsen.

Men, don’t get too distracted on the characters in Wash DC, stay focused on the eternal and “making disciples” (Matt 28:19).

“For the wrath of God is revealed from heaven against all ungodliness and unrighteousness of men who suppress the truth in unrighteousness”
(Romans 1:18)

Men: There may come a day “very soon” that to preach out of Romans 1 will be considered a “hate” crime.  Remember, we may lose a few battles, but look up at the Cross and ponder the empty grave and know with great assurance that the war has already been won!

Those that suppress the truth in unrighteousness without repentance, are facing an unimaginable, unescapable horrific end for all eternity! 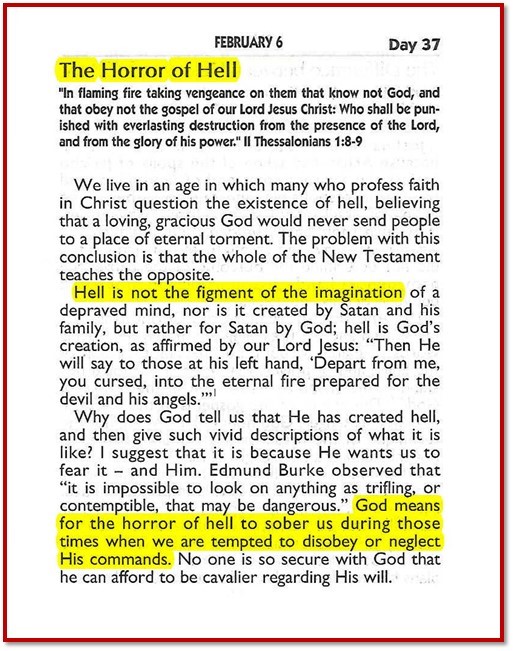 Even though this letter was written over 15 years ago, it is so appropriate for today.  Wow!  Take some time this weekend to reflect on it.
Dwight Hill mentions the game of football and I believe there’s some kind of game being played this Sunday, but I could be mistaken 🙂

Aleksandr Solzhenitsyn stated, “A decline in courage may be the most striking feature that an outside observer notices in the West today
and the decline in courage, at times attaining what could be termed a lack of manhood.  A statesman who wants to achieve something important and highly constructive for his country has to move cautiously and even timidly; thousands of hasty and irresponsible critics cling to him at all times; he is constantly rebuffed by parliament and the press. He has to prove that his every step is well-founded and absolutely flawless.  Thus mediocrity triumphs under the guise of democratic restraints”+

Contrast Solzhenitsyn’s comments with the accomplishment of Johnny Unitas, quarterback of the Baltimore Colts,
“Unitas was famous as a quarterback who ran the team exactly as he saw fit. The field general demonstrated his command of tactics in what’s called the greatest football game ever played, the 1958 National Football League championship match. Here’s how the game went [January 5, 1959]:
“The Baltimore Colts trailed the New York Giants 17-14. Johnny Unitas, Baltimore quarterback, glanced quickly at the clock. In the next 2 minutes, 30 seconds he had to move the Colts from their own 20-yard line into field-goal range, tie the score and force the first sudden-death playoff in a National League championship game. Unitas had to do the job against the toughest defense in Pro Football. Unitas went to work. Throwing hook passes to the side lines that got just enough for vital first downs, he drove the Colts to the Giants 13. There, with a precious 9 seconds left, Steve Myrha booted the tying field goal. Once the Colts got the ball in overtime, Unitas put the game away. He waited until the last second in the face of Giant tackling, hit his receivers with bullet passes, sent fullback Alan Ameche the final yard for a hair-raising 23-17 victory and the Colts first N.F.L. title.”

The Scriptures are replete with men of unbridled courage. For example:

Eleazer
“stood his ground and struck down the Philistines till his hand grew tired and froze to the sword.” (2 Sam. 23:10a)

Apostle Paul
“I know that in every city the Holy Spirit warns me that prison and hardships are facing me. However, I consider my life worth nothing to me, if only I may finish the race and complete the task the Lord Jesus has given me–the task of testifying to the gospel of God’s grace.” (Act. 20:23b,24) (See Num. 13:30; 14:6-12)

Robert J. McCracken stated, “The world is not perishing for want of clever or talented or well-meaning men. It is perishing for the want of men of courage and resolution who, in devotion to the cause of right and truth, can rise above personal feeling and private ambition.”

QUESTION
With God’s help are you choosing to be such a man of courage? (See Ezek. 22:30)

+ Aleksandr Solzhenitsyn, imprisoned and later exiled by the Soviet government, came to the United States in 1976 and delivered this commencement address at Harvard University on June 8, 1978

Even though this movie is long, it will impact you.  It’s well done and the cinematography is amazing.
Note:  On prime video, I signed up for the HBO 7-day free trial.  Watched the movie, then cancelled. 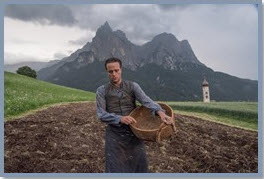 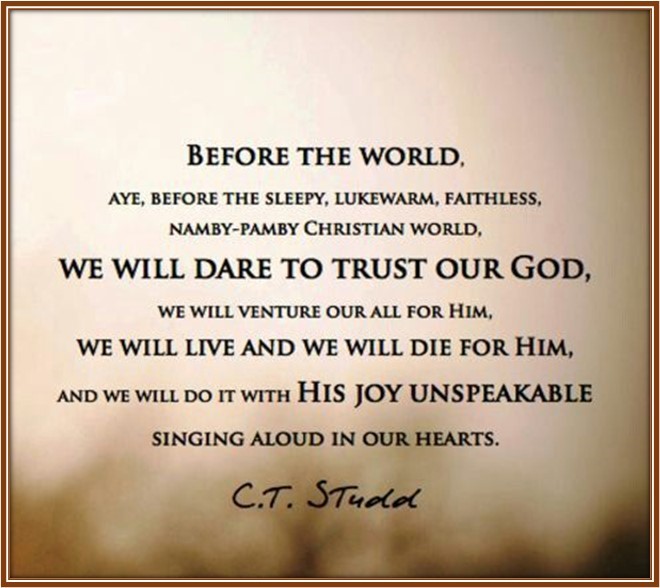 Most of you know that Charles Spurgeon suffered greatly with physical and mental agonies.
To lessen the pain, he not only laughed at himself, but made others laugh.  One of his friends said,
“I have laughed more, I verily believe, when in his company than during all the rest of my life.”

Let’s end on a lighter note and share one of Spurgeon’s humorous quotes: