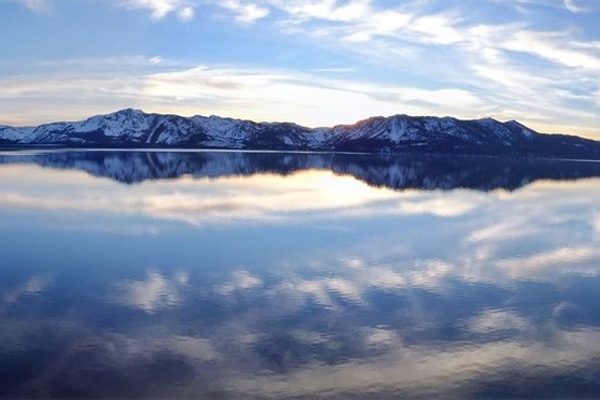 To listen to this hymn performed by Randy Overstreet (click here – 2:50min)

As the verse from Colossians 3:3 declares: “For you have died, and your life is hidden with Christ in God.”  My prayer is for all of you reading this 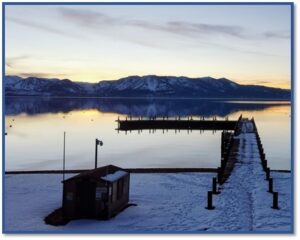 email, that your life has been “noticeably” hidden in Christ this week.  Think about that for a moment……… are you striving on your merits and strength or Christ’s?  Remember:  YOU DIED!  What do you think “born again” Truly means?  Great stuff to meditate on this weekend.

The photo above was taken by my son John on Sunday at about 5:45pm at South Lake Tahoe.  His photo reminded me of the hymn my wife passed on to me.

When we all get to heaven,
What a day of rejoicing that will be!
When we all see Jesus,
We’ll sing and shout the victory!

John is a volunteer member of the Search & Rescue team and has an FAA license to operate the drones when they get that call for a lost person, avalanche warnings, etc.  He took the photo above and to the left with the camera on his drone.  Please keep both John and his wife Paige in your prayers…….. they are expecting their first baby next week.  They have picked the name of Ezra for their son.

As you look around this world today, it’s amazing what a mess we can make of our lives.  I don’t have to look too far back on my own life and it makes the hair stand up on the back of my neck.  One incident happened back in my UNLV days.  I was the president of the ATO fraternity on campus….. a real live animal house.  I was also on the wrestling team at UNLV when it was only a club sport.  I tell you this to show you what a Pharisee I was.  One of guys in the fraternity had a “born again” experience in Christ.  He was so excited that he was sharing this Good News with some of the other fraternity brothers.  When I over-heard what he was saying, I became so enraged, that I literally threw him against a brick wall and said, “If I ever hear any of this Jesus sh_ _ again, I will personally kick you out of this fraternity!”  As I look back at the horror of that incident, I was truly the Saul of my fraternity.  Like Saul, I was super religious, sometimes going to Mass daily, but it wasn’t until I surrendered my life to Jesus under a tree in my backyard that I could see the enormity of the sin in my life and how far I had fallen short of the glory of God (Rom 3:23).  By the way, years later, I located Tom C (the guy in my fraternity).  He was a truck driver in Clarkson, Kentucky.  I asked him to please forgive me for what I had done years earlier.  We ended up having a sweet conversation.  He’s still walking with the Lord …………

I have no words that could ever adequately express my gratitude to God Almighty for rescuing me from utter and eternal destruction due to my sin and then clothing me with the righteousness of Christ.   Earlier I was thinking about the “wages of sin” (Rom 6:23) and the carnage that is left in its wake when you live a sinful life.

The decisions we make today in our personal lives have a profound “domino effect” for years to come.  What is going to be the “Domino Effect” of your life?

Men: These (2) devotionals are profoundly important!  If you lacked a good dose of the ”Fear of the Lord” these two will remedy that (or at least I hope they do).

As noted above, future generations pay for the price of our sin today…………. And if we fail to exercise Biblical discipline, God comes looking for the father!

Who Pays for Your Sin and The Sins of Our Children – Red Book Day 41/45
The purpose of these devotionals is to help you think Biblically
Solomon said, “As a man thinks, so is he” 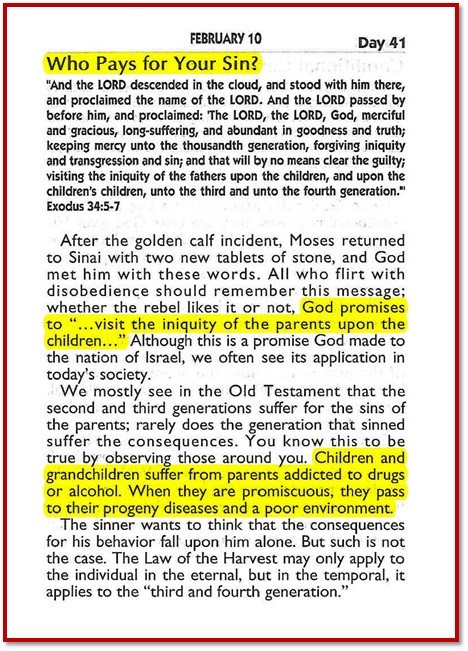 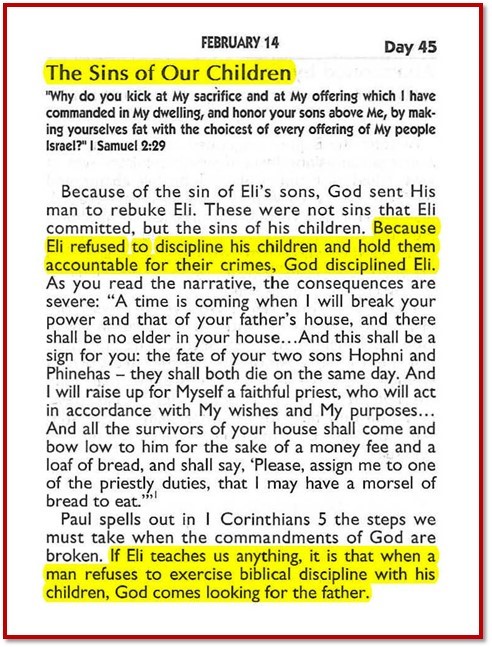 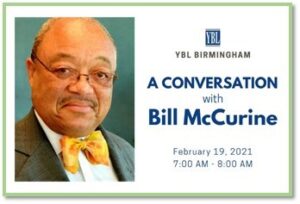 Men:  If you would like to hear the “Testimony of Bill McCurine”….  Mike Williams sent these links.  You will need to register:

WHAT KIND OF HERITAGE ARE YOU LEAVING YOUR CHILDREN?

Recently I received an e-mail letter from Jeanna, my 24 year old daughter-in-law, who had just watched a video of a hard-hitting talk I had given entitled, “Men Without Chests”. Responding to the video, Jeanna sent me the following communiqué:

“I just finished watching your “Men Without Chests” video with Wes tonight and had to write you a note. I was overwhelmed by several thoughts and emotions as I watched and listened to you.

“First, I guess, was THANK YOU!  Thank you for bringing your sorely needed message to men in today’s culture…As I watched, I felt inspired to be the kind of woman that merited a man such as the one you exhorted the men to become.

“Then I began to realize that you are the father (i.e., primary example, teacher, model, source of advice) of the man I am married to!  It brought me to tears to know that when the going gets rough for us that this is the kind of leadership Wes will be looking for to pull through.

“I also realized that the qualities I treasure most in Wes are so deeply related to how he was raised to treat his wife and for that I owe you so much.

“Then, lastly, I began to think about our children–about boys who will be taught about sexual purity and eternal values and about girls who would grow up knowing what it is to be treasured, cherished and loved in the true sense by a man.

“You have begun a legacy which I pray will be passed down through the generations.  I feel so privileged to be part of Wes, of you and your family.

“I love you. Talk to you soon,

QUESTION: What is the heritage you are leaving for your children and their offspring?  The patterns you are setting in your family today will determine the answer to that question. Will it be a heritage that brings glory to God, and joy to your heart in your senior years?

“I have no greater joy than to hear that my children are walking in the truth.” (3 Jn. 4)

Men, take a look at these articles written by our own laymen
If you haven’t registered to receive these articles, you might want to register here

“The destruction that would come with their fall would be far greater than all the good they ever did in their rise.”

For a man who knew the Bible so well, and as we have mentioned so many times, where was his “Fear of the Lord?”

One of the brothers sent me this.  Todd Friel hosts Wretched TV/Radio.  In this clip, he plays parts of a Paul Washer message.  Sobering!