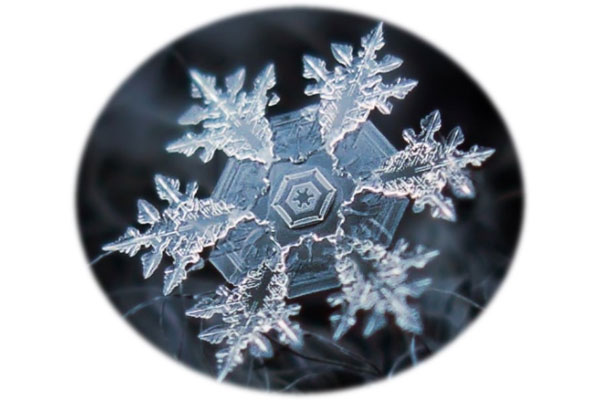 Photo by Alexey Kljatov
“Where were you when I laid the foundations of the earth?
Tell me, if you know so much……
Have you visited the storehouses of the snow…………?”  (Job 38:4,22)

Interesting and somewhat disturbing events out there…….. yet I pray you had a great week “in” Christ, knowing with confidence, that He sits at the right hand of the Throne of God.

Las Vegas actually got a little bit of snow this week, but not as much as my son and daughter-in-law received in Lake Tahoe.  Here is a photo 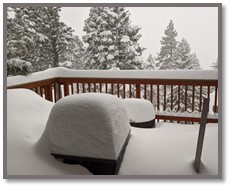 John sent yesterday morning and the last I checked, it is still coming down.  So what’s with the photo above?  It’s a snowflake of course.  At first take you might raise your eyebrows and say, it’s fake – computer generated.  Well for those “Doubting Thomas’s” out there, you are dead wrong.  You can Google Alexey Kljatov and find a ton of his work.   For that photo he used a regular Canon SLR camera with a small desktop tripod.  He took some dark wool fabric as the background and waited for a good crystal to fall on it.  You have to admit, that snowflake is amazing!

The guy that was the father of snowflake photography was Wilson Bentley.  Born on February 9, 1865 in the town of Jericho, Vermont,  A farmer by trade, he attracted world attention with his pioneering work in the area of photomicrography.  Most notable in his lifelong work with rain, dew and frost, was his extensive work with snowflakes.  On January 15, 1885 he became the first person to photograph a single snow crystal (see below) and then went on to photograph over 5000 more (and not one of them identical)  After he died, the town editor made this statement about Wilson Bentley:

“Genius is only a superior power of seeing. Wilson Bentley was a living example of this type of genius. He saw something in the snowflakes which other men failed to see, not because they could not see, but because they had not the patience and the understanding to look.”

I thought that statement was profound.  Why?  Because we can apply it to so many areas of our life.  From a blade of grass to a lightning bolt.   Although, I think the most important and critical area is the time we spend in God’s Word.  Do we take the time and patience and ask for understanding (James 1:5-8)   If we ask God for wisdom in this area, we will start to see something that other men might fail to see.  Several years back, a brother challenged me to spend a few months on one verse.  I did that and it transformed my thinking in a particular area of my life.  You might do the same thing in the days ahead.  If you’re wondering, that one familiar verse was from John 15:5 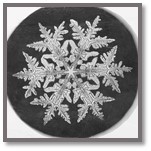 You guys know that I can’t close this discussion without a few fact about snowflakes.  Kenneth Libbrecht, professor of physics at California Institute of Technology (CalTech) said, “This stuff falls out the sky and we don’t know how it works….”  Each flake is unique and many great minds like philosopher René Descartes and nuclear physicist Ukichiro Nakaya have applied themselves to find out why……. Still today, no concrete answer.  If interested, you can go to Ken Libbrecht’s website SnowCrystals.com and find out more than you ever wanted to know about snowflakes.  For example, how many snowflakes are in the average snowball?  About 22K.  An average million billion snowflakes fall each second around the world, enough for 1 snowman for every person on earth every 10 minutes.  Every winter, 1 septillion snowflakes fall and none are identical.

Reflecting on snowflakes makes me ponder what God has in store for us the day we walk into eternity.  It reminds me of 1 Corinthians 2:9   “… No eye has seen, no ear has heard, no heart has imagined, what God has prepared for those who love Him.”  And let’s make sure our eternity is with Him by keeping His word ………..

The one who says, “I have come to know Him,” and does not keep His commandments, is a liar, and the truth is not in him; but whoever keeps His word, in him the love of God has truly been perfected. By this we know that we are in Him: the one who says he abides in Him ought himself to walk in the same manner as He walked. (1 John 2:4-6)

I can truly relate to this devotional by Walt…….
It is my belief that in the days ahead these words will become ever more relevant. 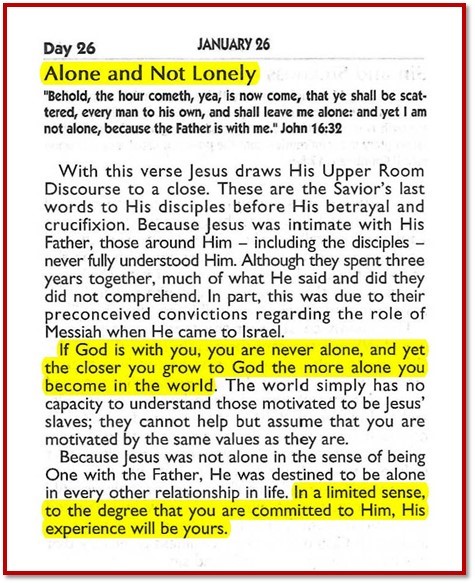 Make sure you ponder deeply on what Lee says.  As I read his 3rd paragraph, I thought of a verse I was reading the other day from Acts 5:41 “The apostles left the high council rejoicing that God had counted them worthy to suffer disgrace for the name of Jesus.”  Get ready to start rejoicing!

Book Review:  “Live Not By Lies” by Rod Dreher

One of the brothers sent me this summary if you are interested:  Rod Dreher’s ‘Live Not By Lies’ Warns Of The New Totalitarianism  Dreher warns of the consequences of living in a post-Christian America and urges readers to suffer, if necessary, for the sake of upholding the truth.

Again I find what Aleksandr Solzhenitsyn said so true:

“I have spent well-nigh fifty years working on the history of our revolution; in the process I have read hundreds of books, collected hundreds of personal testimonies, and have already contributed eight volumes of my own toward the effort of clearing away the rubble left by that upheaval.  But if I were asked today to formulate as concisely as possible the main cause of the ruinous revolution that swallowed up some sixty million of our people, I could not put it more accurately than to repeat: ‘Men have forgotten God; that’s why all this has happened.’”      [Aleksandr Solzhenitsyn, The Templeton Address, London, 10 May 1983]

Let’s heed the wisdom from Aleksandr and encourage others to do the same.  Today more than even, we need to seek the “mind of Christ.”  I just love what Paul says in Eph 1:18-19

“I pray that the eyes of your heart may be enlightened, so that you will know what is the hope of His calling, what are the riches of the glory of His inheritance in the saints, and what is the surpassing greatness of His power toward us who believe………….”

Men, I was having a great discussion with a dear brother this week touching on Assurance vs. Certainty.  I thought it’s such an important topic that we need to review it and pray to not have a “knee-jerk” reaction, but as mentioned above, ask the Lord for patience and understanding.  We walk by faith with a heart of obedience!  (See attached PDF)

Grace Flows from Election and Believers Cannot Be Certain they are Elect
To order: “Seeking To Understand The Christian Life” (Click Here)

Remember:  “Don’t hold your convictions so tightly, that God has to embarrass you with them”

Video Teaching of the Week:

If you missed the last two Sunday messages (17th & 24th) from John MacArthur, find some time to listen to them.
Right now, I believe you would be hard-pressed to find another message like them.  Here is his first message from the 17th.