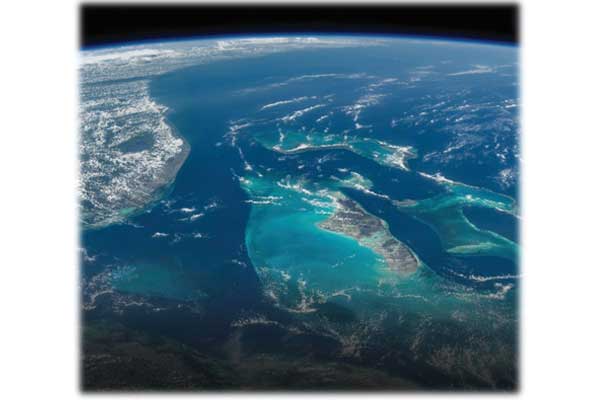 “Heaven and earth will pass away, but My words will not pass away.”
Matthew 24:35

“Rather than seeing ourselves as insignificant specks in the immensity of the cosmos,
we can consider that immensity an indicator of our worth.
It seems the Creator invested a great deal – a universe of 50 billion trillion stars,
plus a hundred times more matter, all fine-tuned to mind-boggling precision – for us.”
Dr. Hugh Ross – Astrophysicist

I pray “….that He would grant you, according to the riches of His glory, to be strengthened with power through His Spirit in the inner man….”  (Eph 3:16)
“For this reason I bow my knees before the Father, from whom every family in heaven and on earth derives its name…” (Eph 3:14-15)

In studying Ephesians, the first three chapters deal not only with who we are, but “whose” we are.  Over the weekend, my wife and I watched Part 1 of a most unique virtual Biblical creation account called Breath of Life.  When my wife sent me the link, I was intrigued by it because I saw one of the narrators was going to be Hugh Ross, an astronomer who impacted my early walk with Christ.  His ministry is called, Reasons to Believe.  After the presentation of Breath of Life, there was a Q&A and Hugh Ross made a few statements that really hit me.  To paraphrase, he said that our Solar System was perfectly designed by God to support our tiny earth (you know, that Pale Blue Dot)…….. and that our Milky Way Galaxy was perfectly designed to support our Solar System…… and it goes on from there.  By the way, when Hugh Ross worked for Cal Tech, his specialty was galaxies.   Back to those amazing verses in Ephesians, if we take what Hugh Ross has spent his life studying, God created the whole universe just for us!  Not only that, God holds everything in the Universe together, “He existed before anything else, and he holds all creation together.” (Colossians 1:17).  Hugh Ross went on to say that if God let go, since everything is ultimately composted of atoms, it would all just vaporize………everything!  This is mind-boggling stuff men!  I do hope you that you are spending time reflecting on this God and pouring yourself into His “living” Word….. or do the Olympics take front and center?

If you want to check out Breath of Life, here is the link:

———— —————
With Valentine’s Day behind us, I wanted to let you guys know that my chocolate-covered strawberries were a hit!  Once I found the right strawberries, the rest was not only easy, but fun to make…… mission accomplished in about 30-40 minutes.  Next year, you ought to give it a try.  Of course, if there are kids or grandkids, nephews or nieces nearby, make sure you give them the chef hat 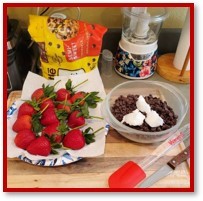 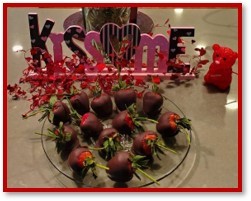 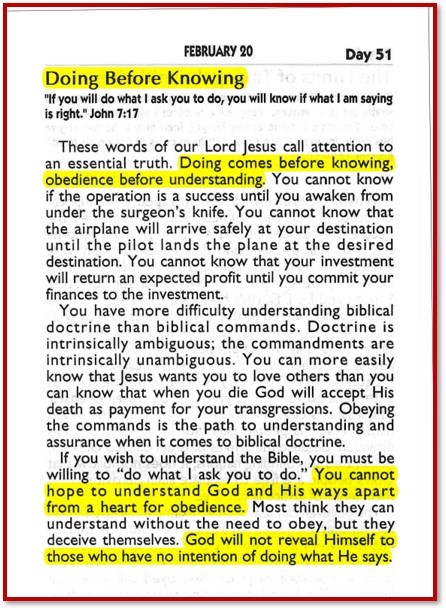 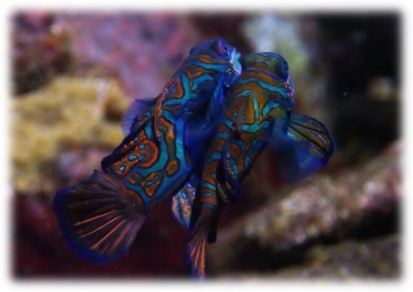 When my grandkids were here over Christmas, I found this video to watch with them when we needed a break from the sand pile.  In watching it, I got hooked.  I was captivated on their beauty and diversity.  I could only ponder what an amazing God we have that created such exquisite creatures.  If I want to relax before I go to bed, I pull this video up, not Jason Bourne 😊

This was a letter that Walt wrote back in June of 2013. 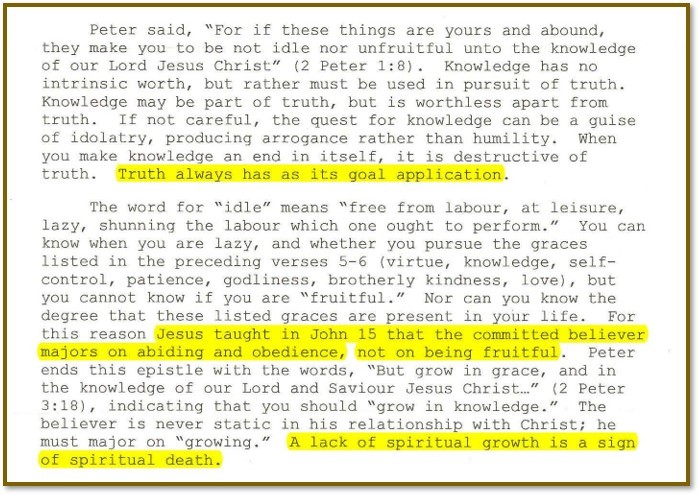 I really liked Leette Henrichsen’s February Letter!…….. and many of you know how much I love clouds 🙂 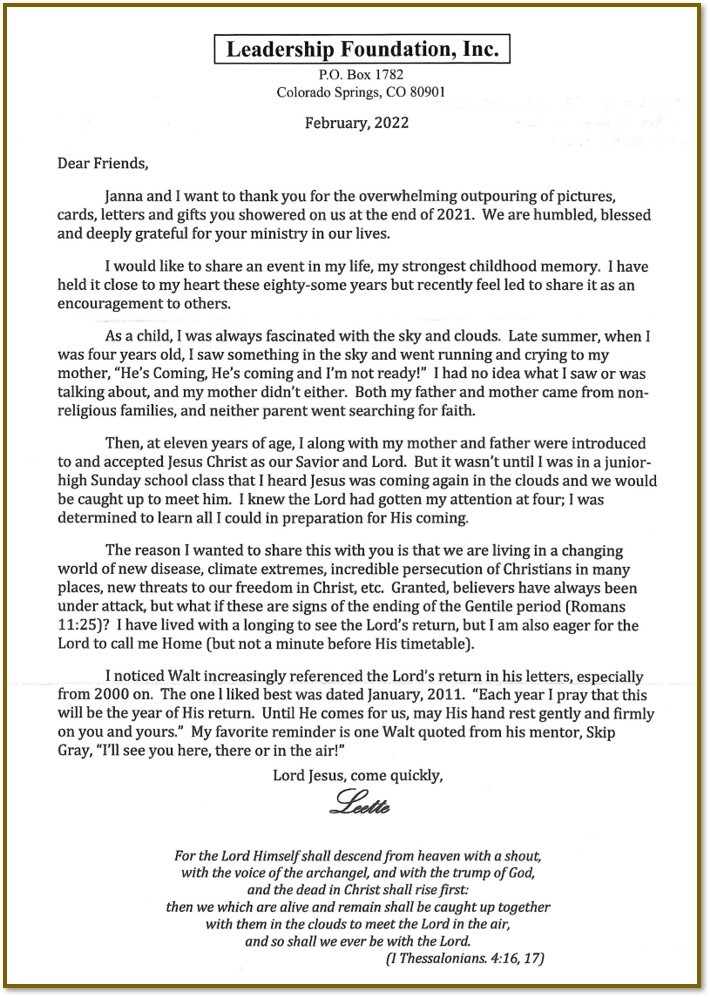 A missionary couple you may not be too familiar with………. 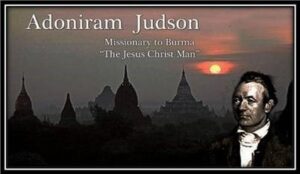 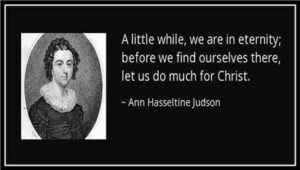 Adoniram Judson  (1788-1850) and Ann Hasseltine Judson (1788-1826)
Adoniram Judson and Ann Hasseltine, both from Massachusetts, married in 1812.  Married only 2 weeks, they both left for Calcutta, India.  Ann Judson was the first woman missionary to travel to a foreign land.  They were both forced to leave India and departed for Rangoon, Burma, living in “very” trying conditions.

You have to read what Adoniram wrote to his future bride’s father!

Giving Your Daughter Away

Some 200 years ago, Adoniram Judson was preparing to take the gospel of Christ to the people of India.  He also wanted to marry Ann Hasseltine.  When he contacted Ann’s father, John, to ask for his blessing and permission for the marriage, here’s what he wrote:

“I have now to ask whether you can consent to part with your daughter early next spring, to see her no more in this world; whether you can consent to her departure for a heathen land, and her subjection to the hardships and sufferings of a missionary life; whether you can consent to her exposure to the dangers of the ocean; to the fatal influence of the southern climate of India; to every kind of want and distress; to degradation, insult, persecution, and perhaps a violent death? Can you consent to all this for the sake of Him who left His heavenly home, and died for her and for you; for the sake of perishing immortal souls; for the sake of Zion and the glory of God? Can you consent to all this in hope of soon meeting your daughter in the world of glory, with a crown of righteousness brightened by the acclamations of praise which shall resound to her Saviour from heathens saved, through her means, from eternal woe and despair?”

Would you give your daughter away after reading that? 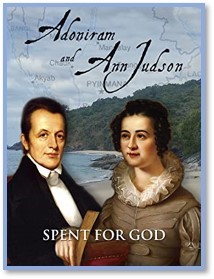 If you and the family would like to watch this short movie on the life of Adoniram and Ann Judson, I highly recommend it.

The tribulation and hardship they suffered was intense.  “Indeed, all who want to live in a godly way in Christ Jesus will be persecuted.”  (2 Tim 3:12)  They certainly qualify.

…No matter how dark your days may be now, they will get darker…

Blog 56 – “Let the Reader Understand”
I thought this blog from a friend of Gayle Jackson, was relevant for the times we are living in……(see attached PDF)

George Whitefield (1714-1770) was a man of the Word, so humble, yet spoke with great power from the Lord.
He addressed the preachers of his day and even made this bold comment:

George Whitefield was greatly concerned about these matters and he made these statements almost 280 years ago!!!  Why is there no power in the preaching of the Word these days?  Are most are too distracted and busy with other matters, activities, meetings, worldly and temporal attraction, social justice, spending too much free time on the internet, social media and much more?  Are they spending time in the Word and on their knees pleading with God in prayer to give them a WORD? ……………. Or as David Wilkerson states in this 7 minute YouTube, where is the “anguish?”  Is there any anguish anymore…… or is the church looking more and more like the world?