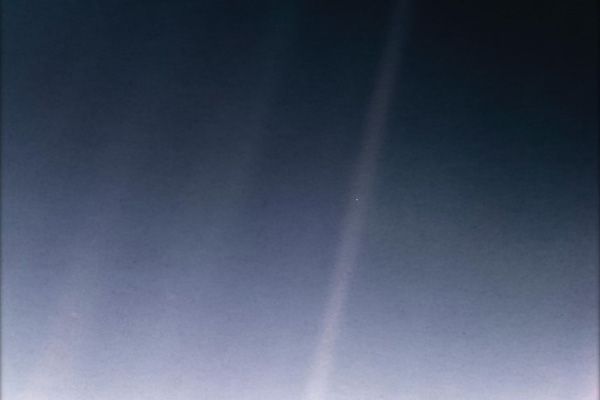 “It is I who made the earth, and created man upon it.
I stretched out the heavens with My hands and I ordained all their host.”
(Isaiah 45:12)

Question:  Was Jesus bold?  Of course the answer is an emphatic YES!  Jesus was perfectly and righteously bold.  We see His boldness throughout the four Synoptic Gospels.  Simply put, Jesus came to earth to save sinners – a rescue mission to seek and save the lost through Him [if interested, here are a few more verses to reflect on:  BibleGateway.com/passage/John-3-16] Yet the vast majority blew Him off and many wanted Him killed!  So my Second Question:  Do you believe this part of Galatians 2:20a  “I have been crucified with Christ; and it is no longer I who live, but Christ lives in me……”  If you believe that Christ now lives in you, Jesus will give you the boldness to carry on His Great Commission to offer an Eternal Life Insurance Policy  to those willing to receive it.  We are to be “always ready” 1 Peter 3:15 men….

As we roll out this New Year of 2022, get on your knees and make a commitment to Jesus thanking Him for what He has done for you, and that you will now “boldly” share this amazing Good News with others.  Tell him you want to be “ALL IN” and part of His E² brothers (Evangelism & Edification/Discipleship) ………. and the good news is this:  What you do for Him now, will make and apparent and appreciable difference as to what your eternity will look like!   In the benefits arena, we might call that, “Deferred Compensation.”

Ok, what gives with that seemingly plain photograph above? On Christmas Day, my son John and his wife Paige presented me with this this framed photograph. Believe it or not, I don’t ever remember seeing this photograph. Voyager 1 took this photo as it left our solar system in 1990 (one year before I received Christ under a tree in my backyard). Take a close look at the above photo (center right). Do you see that tiny dot in the middle of the white band? That my brothers is EARTH !! Three frames were combined by NASA/JPL (Jet Propulsion Laboratory), 640,000 pixels in each frame and that Pale Blue Dot is less than one pixel [More info on Voyager 1]. By the way, this is the most distant photo of Earth that NASA has……. 3.7 billion miles from Earth! Sounds like a huge distance, but it is only 0.0629% of 1 light year.

The following is Amazing!!! Not knowing that my son and daughter-in-law had given me that photograph for Christmas, one of the brothers from Madisonville, LA that receives this Friday letter, wrote me a great email on Sunday, Jan 2nd. He really enjoys the comments on the universe stating how small we are and how big God is by mentioning the Pale Blue Dot…… I kid you not! This brother was born in 1977 when Voyager 1 was launched and over the years has followed its journey. I love what he said in his email, “It is a reminder of how small and insignificant we are, yet God loves us, and we get to have a relationship with Him who created all things.”

What struck me was when he also said, “I am in that picture!”  That’s an astounding observation.  Those alive in 1990 are in that photograph.  As I reflect on that “Pale Blue Dot” and our insignificance in relation to the universe, it is beyond humbling when we reflect on the fact that “I AM” came to that pale blue dot to redeem us.  On Monday, another brother in San Diego sent me the following devotional.  It really hit home based on all the comments: RayStedman.org/who-is-jesus
You will want to take a few minutes to read it.  Profound!

[Note:  The image my son gave me was NASA’s 30th Anniversary digitally enhanced version using modern image processing techniques “while attempting to respect the original data and intent of those who planned the images.”  The image was enlarged and made less grainy.  I just love this seemingly plain photograph.  You could have conversations all day long with both believers and unbelieves on just how deep this image truly is!]

Your brother “in” Christ,
(One of 7 billion dots inside the Pale Blue Dot)
Dan
(Galatians 2:20)

Men:  Are we like Solomon?  Of course I’m not directly talking about his WISDOM, WEALTH or POWER.  I’m talking about Solomon’s blatant disregard for God’s commands.  I have placed below, the INTRODUCTION to the daily devotional, “Warnings for a People Not Listening to God” commonly called, the Red Book.  Please read it thoughtfully and don’t blow it off.  Ask the Lord that you would be teachable as you read it.  What is truly being conveyed to us? 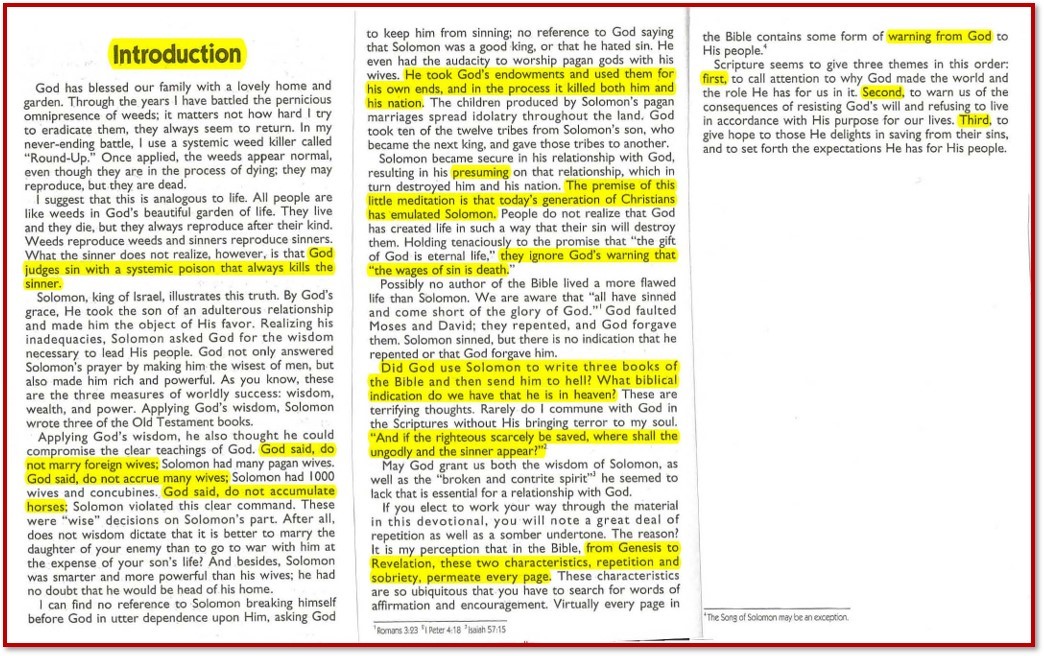 If you don’t have this devotional or the Blue Book or Green Book, order here:  MIMbooks.com/page/3/ 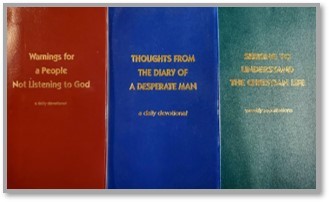 Men:  I forgot to include this beautiful arrangement of Handel’s Messiah in the December email.  I believe this is one of the finest performances in recent years with 600 members in the Sydney Philharmonia Choir.  One of the brothers that now makes this an annual tradition said, “If that is a glimpse of what awaits us, can’t wait.”  I totally agree.  Jane & I watched it on New Year’s Eve……… a perfect evening!

Trivia Question:  Was Handel’s Messiah written for Christmas or Easter?
It was written for Easter!  Only the first third of “Messiah” is about the birth of Jesus. Part II covers the death of Christ and the third is focused on the Resurrection.  So make sure you listen to it again this Easter, April 17.

WHO ARE YOU?  WHY ARE YOU HERE?  WHAT ARE YOU SUPPOSED TO DO?

I have included these (2) paragraphs before, but since it is a new year and even the Bible repeats over and over foundational Truth we need firmly planted in our heart and mind.  So here they are again [From Dave Dawson’s book, Priesthood of Every Believer].  Share them with you church leadership and get their input.

A Christian’s true identity is displaced when he is taught that church leaders (clergy) are the only real priests. This theology purports that the clergy are the activists in ministry and that laypeople are only there to offer support from the sidelines. The result is a loss of identity, and a loss of direction and purpose in life. Every believer needs to be able to articulate who he is, why he is here, and what he is supposed to be doing during his short time on earth.

According to these passages every church leader, apostle, prophet, evangelist, pastor, or teacher’s primary priority is to equip, train and perfect their members in how to carry out their priestly functions. Everything we need to train our ‘priests’ is in the Bible. As we take our priests into the Word of God, we give the Holy Spirit everything He needs to help them understand what God is saying to them. Only the Holy Spirit can bring conviction that will lead them to application and willingness, desiring to be transformed into the priests that God created them to be. The Bible knows nothing about a Bible School or Seminary. God used Rabbis to train His people and God made the church leaders responsible for training their members in knowledge that God’s vocation for their lives was to be a priest.

“But you are a chosen people, a royal priesthood, a holy nation, a people for God’s own possession, to proclaim the virtues of Him who called you out of darkness into His marvelous light.”  (1 Peter 2:9)

Men:  I was first introduced to this book by our brother Jonathan Koehler.  He knows Jon and Pam Strain personally.  I have this book and have used with some of my High School buddies.  This was one of the opening text message conversations I used back in September: 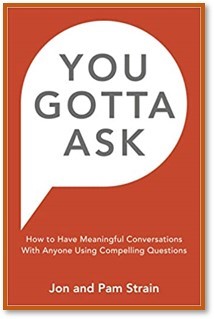 Dan:  Hey Phil,
I’m on the plane with Jane heading to visit our family in Mexico.  I’m reading this book and found this compelling question.  How would you answer it?  I’ll share mine after you share yours.  Deal?
“Assuming there is a God, and you could ask God anything, what would you ask?”

Phil:  “Where the hell have You been?”

You get the idea.  This book gives practical advice on how to engage and start a conversation using compelling questions.

By the way, even though 4 months have elapsed, Phil and I will be getting together in person in a few weeks.  He wants to meet………

Next Week:  The Adventure Dinner Guide – Mixing food with conversations to get people to take a step closer to God 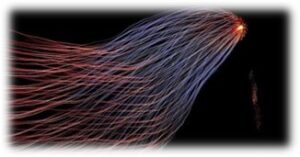 The Squiggly Line of God’s Providence

“Our deepest grief may flow into a million goods and our greatest triumph may be downstream of a thousand sorrows.” 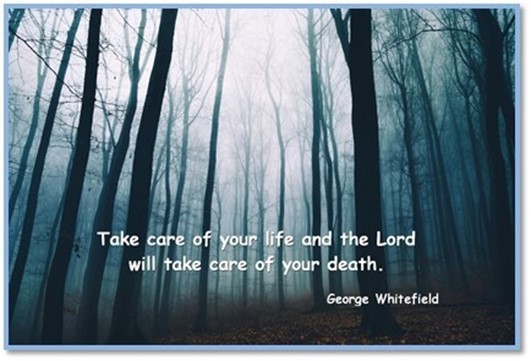