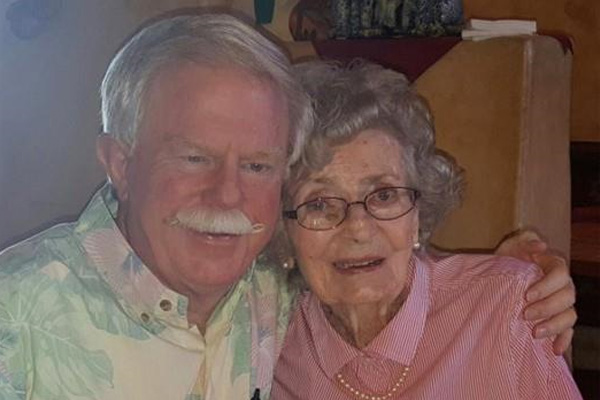 Mom on her 93rd Birthday

She would have been 100 years old today!

“Nothing could persuade them until Truth
meant more than tradition”

Note:  15 years ago, Barna Research said that only 1 out of 4 evangelicals are born again (going to Heaven).  That is a terrifying statistic.  If there are 1.4 billion Catholics worldwide, what percentage of that number is going to Heaven?

Undoubtedly, this has been one of the more difficult Friday letters for me to write.

PART ONE – Danny “A Priest in the Family” (not quite)

Some of you know parts the following story:  I was born a Roman Catholic, became a devoted Altar Boy and worshiped the Virgin Mary.  My mom would have loved nothing more than to have a priest in the family and the Bishop of Nevada, Daniel Greene, and my parish priest, Monsignor Collins, were grooming me (in a positive way) to enter the Regina Cleri Seminary in Tucson.  When I was ready to enroll at Regina Cleri, my mom had to sign the paperwork I had brought back from Tucson and said, “Dan, maybe you should finish High School here and then go to the seminary.”  That was total shocker, for I was all ready to enroll.  I knew nothing about God’s Sovereignty back then, but can look back now and I see His fingerprint on my life.

Fast forward……. I entered Bishop Gorman High School in 1967, then UNLV in 1970.  I graduated with an accounting degree in 1977 (I compressed my 4 year undergraduate degree into 7 years 😊) then married my dear wife in 1980.  Even though Jane was raised in a Christian church she agreed to be married at St. Viator’s Catholic Church.  I was also quite confident I could convert her over to Catholicism…… WRONG!  Jane is a very clear thinker and would challenge me from time to time regarding the inconsistencies of Catholic Church.  I would be furious and stomp off.  On Sundays, she would take our (2) young boys to the little Bible church meeting in a triple-wide trailer and I would head off to Catholic Mass, meeting at Palm Mortuary on Eastern Ave.  In the ensuing months, I was becoming restless, depressed and confused.  Everything I attempted (business, finance, personal) was heading straight down.  I started contemplating suicide.   One day, while sitting in Mass, a chill came over me.  Why am I here alone and my wife and boys are elsewhere?  We are praying to the same God aren’t we?   Stuffing down my Catholic pride, the following week I asked Jane if I could tag along with her…. if her jaw could have hit her chest, it would have.  Even though I was angry at God and trying to disprove His existence, God started to reveal Himself through the beauty of the Gospel.  I fought the Hound of Heaven for almost 18 months and then found myself under a tree in my backyard at 2am in the morning (See attached PDF “Under That Tree”)

I can’t tell you how many times I heard that.  “Danny, your mom is a saint!”  My mom was a wonderful mother.  She was a beautiful and fervent Catholic woman.  She went to Mass every day, made thousands of rosaries, traveled to Our Lady of Medjugorje, was a devout and involved member of St. Viator Catholic Church for 49 years and did her best to balance our dysfunctional family.  She also had a passion for running and was a member of the Las Vegas Track Club.  She was running both full/half marathons, and 10K’s even into her 70’s and 80’s.  Everyone loved Marybelle and so did I…….

When I received Christ “Under That Tree” there was no doubt that something had radically happened to me and I wanted to tell EVERYONE!  Jesus was alive and no longer hanging on a cross!  Since I was so close to my mom, I started sharing the Gospel with her.  I have to admit, in the early years I came on a bit strong which sometimes upset her.  It seemed to happen more when I addressed her devotion to the Virgin Mary.  You have to remember, I too was in that Mary camp until Jesus became my “All in All.”  I was very persistent with my mom and over the next 25 years I didn’t give up.  I wrote her numerous letters heart-felt letters with all the Bible verses.  She threw most of those away (note:  I made copies of some of them).  I gave her countless cassette tapes, which she told me later she gave to the priests at St. Viators.  They told her your son is just a passionate Jesus Freak, they have seen those types come and go.  I gave her a subscription of Decision Magazine, and article after article…… all to no avail.  Like the quote at the top, the Word has to become more important than Catholic tradition.

Then on her 95th Birthday, a day I didn’t want to be at mom’s because I was so tired, the Spirit of the Lord fell upon her.  After I returned home, I was exhausted and only wanted to crash………. But, God moved me to write up what happened.  So I stayed up till about 3am to document the conversation with my mom on her 95th Birthday.  If interested, I have attached the PDF of that evening for the first time (See attached PDF –  Marybelle Russell – A Heavenly Birthday)

Mom’s Four Last Words To Me

“Salvation for my family!”

My mom went to be with Jesus on that Saturday. I miss her, but I am so joyful

“For by grace you have been saved through faith; and this is not of yourselves, it is the gift of God;
not a result of works, so that no one may boast.”  (Ephesians 2:8-9)

Do you want to end up like Solomon, hating life? 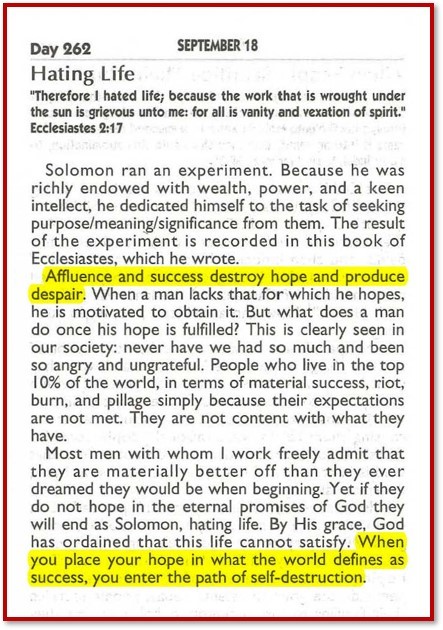 More on Solomon……  Of the people in the Bible, you would think Solomon would be in God’s Hall of Fame in Hebrews 11.  Do you think Solomon will be in Heaven?  If yes, why? 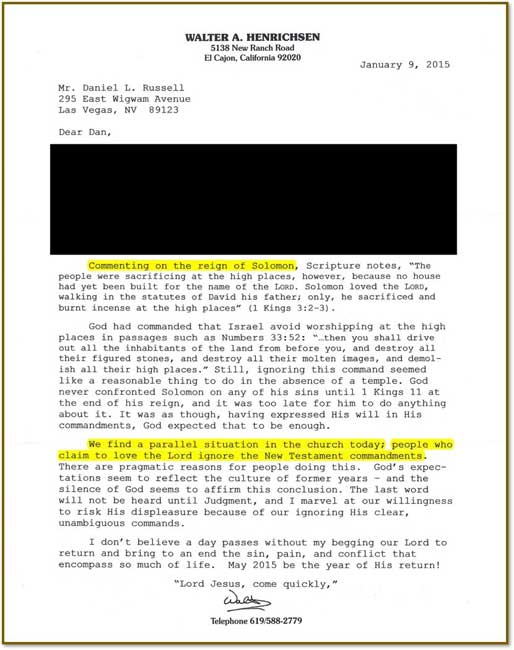 In this month’s Knights of Columbus Magazine “Columbia” (July/August 2022) a soon to be ordained Catholic priest, Bradley Easterbrooks, formerly a Navy judge advocate general, made the following statement when he visited Lourdes on a pilgrimage:

“Now, in preparation for my ordination, I have given myself to Our Lady, asking her to pray to her Son that my ministry as a priest be fruitful in everything God wants it to be. I’ve asked Mary in a special way to be a caretaker of my priesthood.”

“For there is one God, and one mediator also between God and men, the man Christ Jesus”
(1 Timothy 2:5)

William Tyndale was strangled and burned at the stake for letting the common people have the ability to read the Bible in English.
This quote by him is so profound!

For some time now I have been asking my Catholic buddies two questions ( by the way, I LOVE my Catholic friends, my issue is with the institution, not the people). 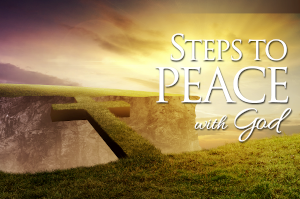 If you are not using “Steps to Peace with God” I highly encourage you to start.  For those that want to send a link through your email or phone, here is one from BGEA:  PeaceWithGod.net/

Lord, Help Me See the Ways to Die Today
By Trevin Wax

“A few months ago, I began asking the Lord every morning to give me chances that day to die to myself…”

Men:  This is a great read!  Click Here: TheGospelCoalitioni.org/See-Ways-To-Die-Today

And He was saying to them all, “If anyone wants to come after Me, he must deny himself, take up his cross daily, and follow Me.   For whoever wants to save his life will lose it, but whoever loses his life for My sake, this is the one who will save it.”
Luke 9:23-24)

Men:  Is this you?  Is the fellowship of your faith effective?

“…..and I pray that the fellowship of your faith may become effective through the knowledge of every good thing which is in you for Christ’s sake.”  (Philemon 6)

If you don’t have a Biblical Fear of the Lord, you are probably not saved! 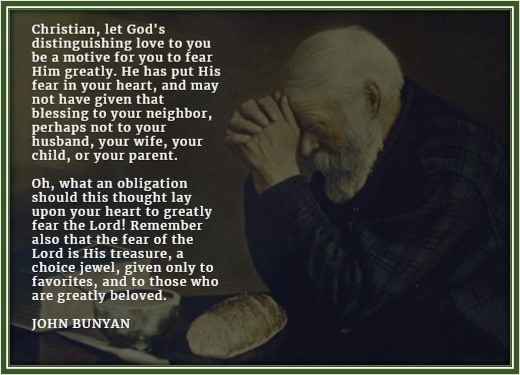