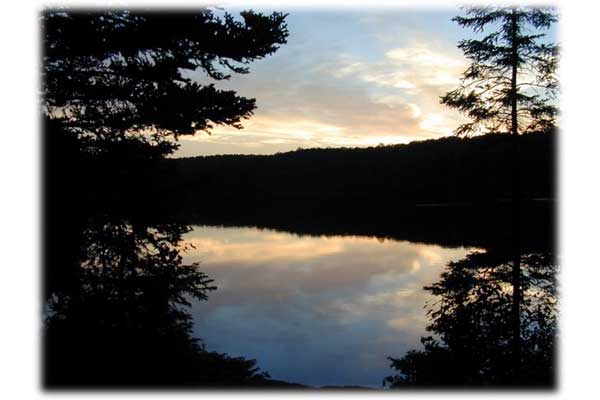 When the reality of the Christ that lives “in” us becomes part of our daily life, know that we won’t stop boasting in the things pertaining to God (Romans 15:17)

I hope you all had a great Independence Day on Monday.  As Paul Tripp stated in his devotional below:

You and I weren’t created for independent living. Even in a perfect Eden, Adam and Eve were dependent on God. Then, add to this the fact that sin leaves us desperately broken and weak. We all need strength beyond our own and wisdom that we’ll never independently possess.

God will “walk away” down the hallway of life and let us experience our weakness once again to remind us of who we are, what we need, and what He’s provided for us. Of course, He’s never actually disappeared or abandoned us, but He will allow us to feel on our own so that we will seek and celebrate the strength and wisdom that can only ever be found “in” Him.  (Make sure you read his devotional)

Years back, I took the photo above to remind me of the peace that God generously gives to those that earnestly seek Him.  The peace He gives is not the peace the “world” offers.  During my Scoutmaster years, we took a group of the older boys to the Algonquin Provincial Park just north of Toronto, Canada.  We portaged canoes with our gear from lake to lake…… a lot more difficult than I would have ever thought.  Below are (2) photos….. one of the boys and one of the men: 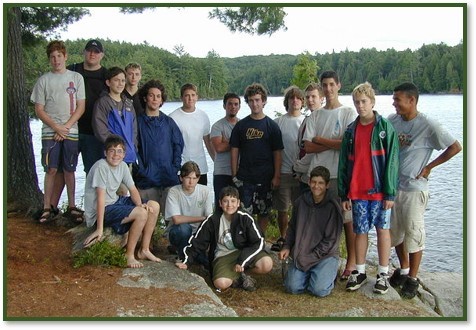 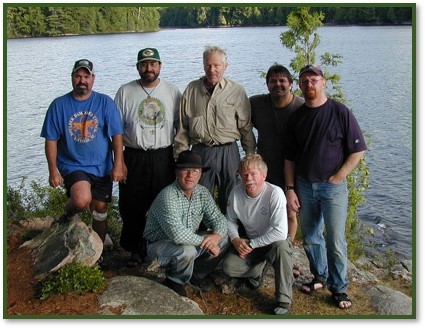 So why am I telling you all this?  If we truly take Jesus’ teachings serious then we will be talking to God about men, and then talking to men about God. In the process of spending time with men, it’s interesting how many of those men are so distracted these days.  I don’t have to be the broken record again, because you guys know very well what those distractions are and could easily pencil out you own list.  [Note:  Make sure you read Walt’s devotional below on “The Perils of Velocity”]

Let me share with you a condensed version of how I became a Scoutmaster.  When my oldest son Mark joined the Boy Scout Troop, I noticed the current Scoutmaster had faithfully served for many years and was now looking to pass the baton.  I told him I would help him find a replacement.  During this time, the troop was meeting at a large mega-church and they were getting ready to have a big men’s retreat…… several hundred men.  I camped out with the outdoor guys and handed out flyers on the amazing opportunity to become involved and I was even allowed to speak to the group before the pastor gave his message.  Do you know how many men showed an interest in getting involved?  A BIG FAT ZERO!  I came home after the conference and was really down.  My wife Jane said what’s wrong and I explained what happened.  She looked at me and said, “Dan, I know the perfect Scoutmaster……. YOU!”  I said impossible, I own my own business and I’m working 60-70 hours a week as it is.  Jane said, “Just pray about it.”  Week after week I became more convicted and ended up going down to the local scout office and buying a couple books on what it takes to be a Scoutmaster.  I had numerous conversations with the Lord over this and said, “God, if You want me to do this, 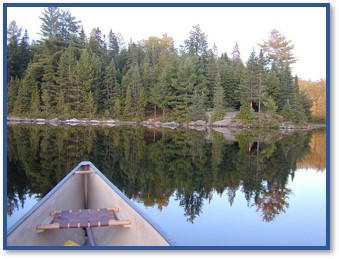 You have to do it, because apart from You I can do nothing.”  And that’s exactly what He did.  Over the next 2 years I pretty much gave up watching all TV (and I “loved” the TV – today it would be that, social media, internet, etc, etc).  With no TV and modifying a few other things I freed-up about 40 hours/week that I could now redirect to the troop.  Two amazing aspects were (1) my business continued to do well and (2) my wife Jane had my back and supported me through it all.  The greatest blessing was seeing God’s Hand on this troop.  It was more of a ministry than a traditional Boy Scout Troop, yet God elevated this troop to such a degree that it became a model troop for Las Vegas.  We were the first troop in Nevada to e featured in Boy’s Life when we took large group of the older boys ice climbing on glaciers in Alaska.  I served as Scoutmaster for over 9 years and wouldn’t replace those years for anything.  Walt Henrichsen modeled for me how to pour my life into those boys…… and the blessing of having my own two boys in that troop was huge.  God also equipped the troop with the most amazing group of adult leaders.  There are hundreds of stories of what God did through this troop, like when one of the older boys gave the message on a weekend outing up in the mountains using Walt’s letter on “Sexual Purity.”  It was a jaw-dropper as he put it in his own words (see attached).
Let me end this treatise by saying that I believe God loves us stepping out, taking risk, trusting Him and walking by faith.  One evening in Algonquin Park Canada, I took one of the canoes and paddled to a small island (see photo on left).  The verse from Psalm 46:10 resonated deep within, “Be still, and know that I am God.”

Next week a lot is happening!  My son Mark and family begin their trek to North Carolina.  After Mark departs, I catch a flight to Reno to join my younger son John to also drive (with trailer) across the country as he and his family move to Tennessee.  I would covet your prayers for them as God continues the process for their relocation.  Also pray for my wife Jane ….. the house will be pretty quiet since we have had non-stop excitement for over a month.  Our identical twin grandsons both learned how to walk while living with us.  I have a step counter on my phone and my average has been 12,000 steps/day just chasing the kids around the house and in the backyard 😊

Don’t let this weekend get away from you without reflecting on this devotional……….in what areas are you convicted? 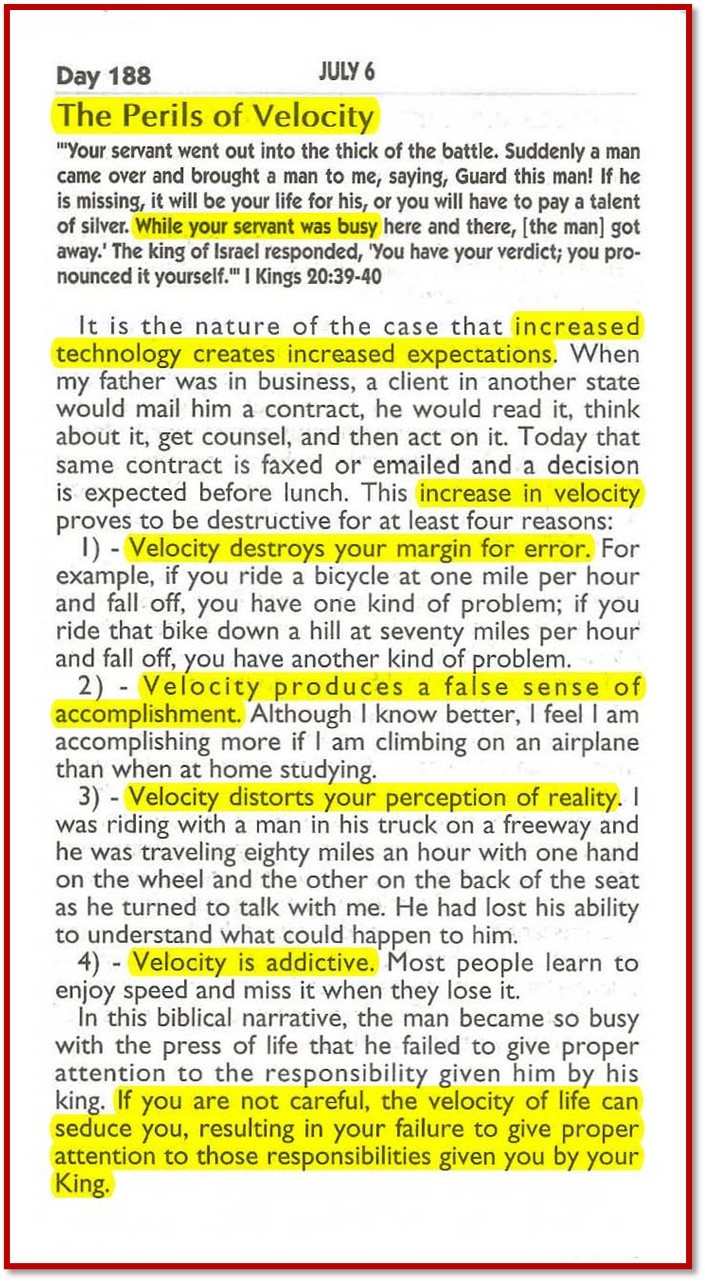 “Having declared spiritual bankruptcy, you came to God asking Him to live His life through you.”  Is this true for you? 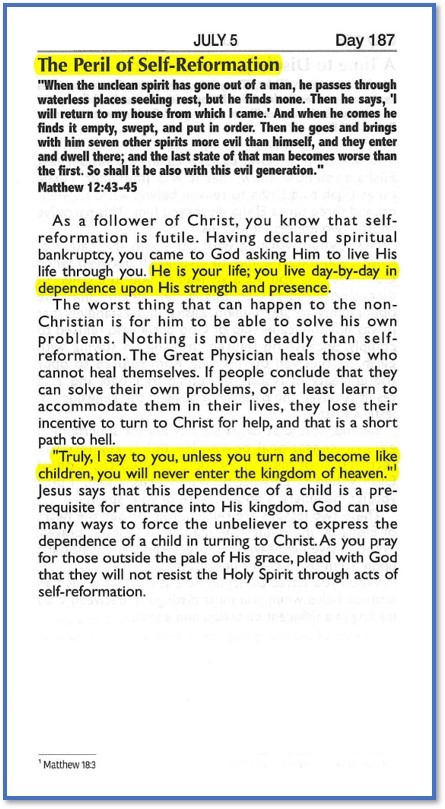 “…..Every month I am attending different pastor’s meetings,
but this one is different”

You will enjoy this 1 ½ minute video I received this week from Daniel Janagam of India.  A very unique testimony.  Daniel Janagam was teaching pastors and laymen about E2 (Evangelism and Edification/Discipleship) in various cities in India. 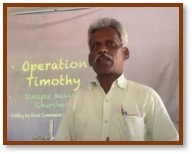 Pastor Yesanna of Mahabubabad, India
His previous ministry focused on the faith movement and the prosperity gospel methodology.
He now changing…….  Praise God

“God works through men.
I see nowhere in the Word
where God picks an organization.”

• Dawson Trotman – Founder of the Navigators •

Dawson Trotman’s Born To Reproduce audio.
If you haven’t listened to this timeless message, please do!

Men:  There is a reason so few in the church today are involved in “true” discipleship.  For one reason, it’s difficult, stinky and messy.  The second reason can be summed up by Dwight Hill:

The day you choose to become proactively engaged in winning the lost and discipling the saved, the war with the Enemy heats up. Go ahead, attend church, sing in the choir; attend religious programs. No problem, because you are of little if any threat to the Enemy. He’s more than happy to keep you busy with religious activities. As an evangelist and discipler, you are entering a spiritual battle with the arch enemy of your soul. So brace yourself for his vicious attacks.
Dwight Hill – Discipler of Men

Men:  The stanza from this 1879 hymn certainly puts things in perspective regarding the Sovereignty of God:

“I sought the Lord, and afterwards I knew, He moved my soul to seek Him seeking me. It was not I that sought Thee Savior true; I was sought of Thee.”

Men:
Are we in those days?

“But know this:  There will be terrible times in the last days.  People will be lovers of themselves, lovers of money, boastful, proud, abusive, disobedient to their parents, ungrateful, unholy, without love, unforgiving, slanderous, without self-control, brutal, not lovers of the good, treacherous, rash, conceited, lovers of pleasure rather than lovers of God, having a form of godliness but denying its power.  Have nothing to do with such people.”
2 Tim 3:1-5 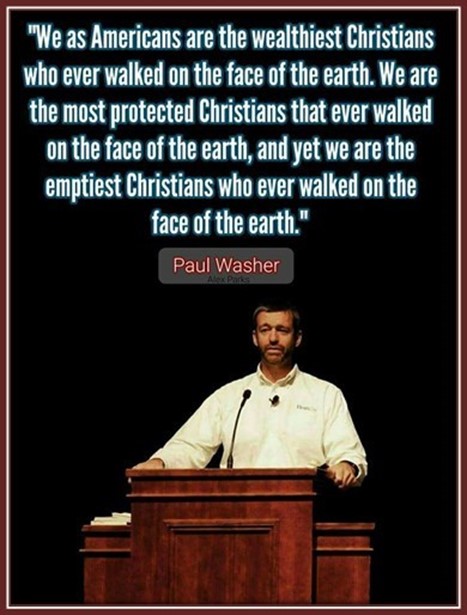