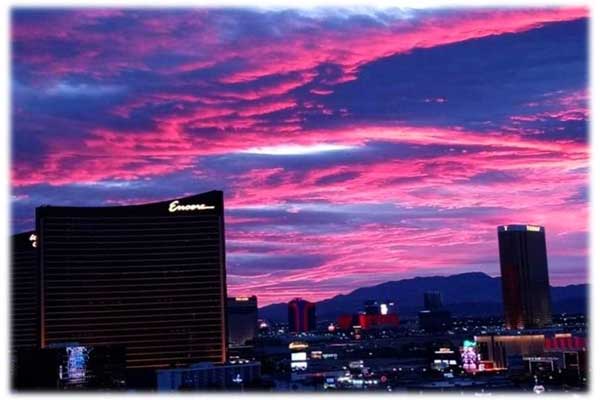 “No man, having put his hand to the plow, and looking back, is fit for the kingdom of God”

I pray you had a great week “in” the Lord…..
“But by His doing you are “in” Christ Jesus, who became to us wisdom from God, and righteousness and sanctification, and redemption…”  (1 Cor 1:30)  We must always remember, it is from His doing, nothing we did!

The photo above was taken on Monday by the gal that lived with Jane and me for several years.  Now, as a health care worker, she was at one of her clients and grabbed this amazing sunset from their balcony at Turnberry Towers.  These sunsets and sunrises are just a tiny glimpse of eternity.  What Jesus is preparing for us will make these pale by comparison.

IN YOUR OWN BACKYARD – PART 3

Well, I have been reflecting again on my backyard.  Years ago we had some very large Cottonwood trees that had tapped into our leach field from our septic system…. they were very happy 😊.  All this was unknown to us at the time until we hooked into the county sewer as they were running the pipes down the street.  Slowly the trees died…… you couldn’t water them enough.

Due to an ad from a local nursery, I decided now is the time to plant some replacement trees that I should have done many years ago.  I headed down to the nursery and as I was walking in, I said, “Lord, if there is someone you want me to talk to, I’m available.”  So when I walked into the main building, most of the guys were busy except for one guy eating his lunch.  We made eye contact so I walked over to him and said, “keep eating, I have a couple questions.”  In the course of our conversation, I found out that he’s from Kentucky and mentioned (2) important things, Guns and Jesus!  Well that’s all it took.  He (his name is Scott) had been praying for some Christian men in his life.  When I told him about our Friday group and the Zion conference coming up, big tears welled up in his eyes.  Within the next few days, Scott and his son had already signed up for Zion.  Today I stopped by and gave him some more “Steps To Peace With God” tracts and some in Spanish.  Also the Blue Book and (2) MIM booklets.  He already had given the previous “Steps To Peace With God” tract to his boss.  Amazing!  Needless to say, there will be some new trees in the backyard coming soon.

I am completely humbled at the opportunities that God has unfolded …….. Right In Your Own Backyard!

The greatest posture we can have in the days we are now living, is: “ON OUR KNEES!”

Please pray for this weekend……. the men that God sends, the teachers and the venue

Men:  I can’t even begin to tell you how relevant this week’s devotional is……….

Just yesterday morning as I was out walking on a very quiet and seldom traveled street, I walked by a man sitting in his Mercedes 500.  He rolled down the window and we greeted each other.  He said he was a pastor and liked this area to pull over and pray for a while.  I won’t go into detail, but for the next 20 minutes he told me the financial success he has had with his real estate investments.  I did my best to turn the conversation to his church, Christ, the Bible, etc.,  but he would have none of it (at least that was the case early Thursday morning).  This interaction blew my whole morning…… I was totally bummed out.  The crazy thing about this unexpected meeting, right before the conversation started, I had highlighted the following verse from Job 24, “God, in His power, drags away the rich.  They may rise, but they have no assurance of life.”

Why is it Hard for Rich People to Get to Heaven? – Day 310 Red Book
The purpose of these devotionals is to help you think Biblically 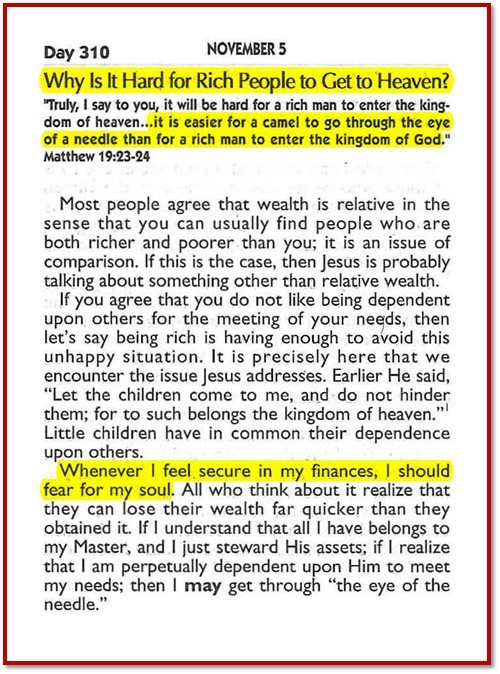 “You’ll never attain if you refuse to burn your boats. When Hernán Cortés took his men to Mexico, his objective was to march on Mexico City and conquer Montezuma. When he landed at Veracruz, he put all his men on the beach and sent demolition teams out to destroy their ships. As the men stood on the shore watching the ships burn and sink, they realized that there was no turning back. They were in Mexico for life.”

Men: If you haven’t listened to this message that Walt gave to a group of young people right after the Vietnam War, please find some quiet time to listen to it.  If you have listened to it, I encourage you to go through it again.  It also makes a great men’s group study.  I have also attached the full PDF along with a link to the audio (below) with the 14 points that Walt put together. 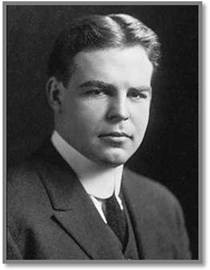 William Borden, of the Borden Dairy estate, never made it to China.  He died of spinal meningitis in Egypt at age 25.  As his biographer stated, “Borden not only gave away his wealth, but himself, in a way so joyous and natural that it seemed a privilege rather than a sacrifice.”

Was Borden’s untimely death a waste?  Not in God’s plan. Prior to his death, Borden had written more words in his Bible.  Underneath the words, “No Reserves” and No Retreats,” he had written:  “No Regrets.”

NO SUCH THING AS TOO HARD MUSIC
Click Here

Men:  If you missed this from last week, make sure you read it this time around.
Pass it on to your wife, daughter and friends…………..

“For we must all appear before the judgment seat of Christ, that each one may receive the things done in the body, according to what he has done, whether good or bad.  Knowing, therefore, the terror of the Lord, we persuade men; but we are well known to God, and I also trust are well known in your consciences.”
(2 Corinthians 5:10-11)