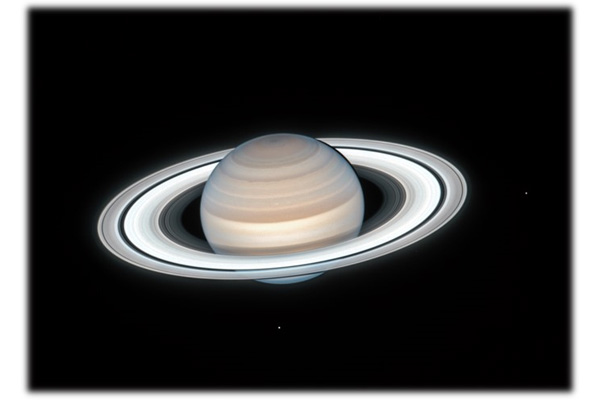 How are you doing?  No, how are you REALLY doing?  Have you been able to keep Christ at the center of your daily activities?  Or is it that one difficult phone call or a splinter in the finger and you’re back into “self.”  The question is: “How long does it take you to come back into the presence of the Lord?”   Remember, what John the Baptist said, “He must increase, but I must decrease” (John 3:30).  That is our goal…………. Dying to self!

So what’s with the image of Saturn above?  The photo was taken on the 4th of July by the Hubble Space Telescope, 840 million miles from earth.  This is a spectacular view and it doesn’t get much better than this.  The atmosphere is mostly hydrogen and helium and Saturn has 82 moons (Titan, the largest moon, is bigger than the planet Mercury).   Like our own moon, when you start digging into the scientific facts surrounding Saturn, you will quickly find that there are numerous unexplained phenomenon’s.  If interested, let me know.  They launched the Cassini orbiter back in 1997  to explore the planet and it arrived at Saturn in 2004.  The Cassini spacecraft took over 453,000 images of Saturn and ~4000 scientific papers were published.  The Cassini took a final deep dive into the planet on my birthday in 2017.  If interested, here is a 4 min. video of “NASA at Saturn: Cassini’s Grand Finale”.

I have numerous conversations with men about space, not only discussions with unbelievers, but professing Christians.  To get a man to reflect on the One that created Saturn, etc. and

that we exist for Him and NOT vice versa can be a game-changer!  Most of you know the stats…..  only about 25% of those that claim to be born-again believers actually have a relationship with Jesus Christ.  I heard a message by John MacArthur where his greatest area of evangelism is now directed to “professing believers.”   Most of you have seen these tracts, “Steps to Peace with God.”  They work!  Why?  Because they have God’s Living Word inside. The fist verse you come to is:  “….We have peace with God through our Lord Jesus Christ.” (Romans 5:1). Now that is Good News!  Raise your hand, who would like some of that?  Men, have a few of these in your pocket at all times.

I recently heard a testimony of a “Special Forces” soldier who had multiple deployments in Afghanistan.  He had been in horrific combat situations. He said, “Why is it that I was less fearful in those intense situations in Afghanistan than in sharing the Good News of Jesus Christ with an unbeliever?”  I think we have to go to the verse at the top of the page.  We are not in a flesh & blood war, we are in a spiritual war and the stakes are eternal……….. (see Dwight Hill’s devotional below).  We will be attacked, but we need not fear our Enemy (Satan), but only need to fear God……  “Do not fear those who kill the body but are unable to kill the soul; but rather fear Him who is able to destroy both soul and body in hell.”  (Matthew 10:28)

Once you start sharing Christ, you won’t be able to stop……… 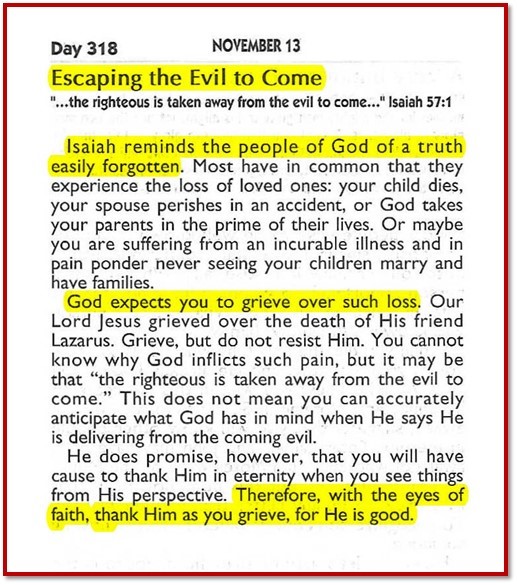 Audio Message of the Week: 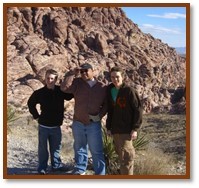 Bill is a retired Federal Magistrate Judge based in San Diego.

The photo is from 2006 with my (2) boys at Red Rock Canyon.  That afternoon, Bill had his first “Buffalo Burger”

Bill was in town to teach a couple’s Bible study for the Friday Group.

Video of the Week:

If you haven’t seen it already, you can watch on Netflix, Amazon Prime and by other ways.  Here is the main website:  http://www.americangospelfilm.com/   For me, the testimony of the young couple whose wife has been through such major medical challenges was worth the time spent watching this documentary………….. humbling!

“American Gospel examines how the prosperity gospel (the Word of Faith movement) has distorted the gospel message, and how this theology is being exported abroad.”

Note:  I saw personally in my travels to India how the Prosperity Gospel has wreaked havoc on the Christian Church there…… and the USA exported it to India!

I can’t believe it’s been 6 years since the Friday Group went through all 10 parts of these devotionals.  Read Part 8 again and ask yourself if anything has changed in your commitment to Christ since this study?  Are you and the men in your church willing to suffer and persevere for Jesus?  Does anyone hate you because of Jesus?

TEN CHARACTERISTICS OF A DISCIPLE MAKER (Part #8 of 10)

He is willing to suffer and persevere for Christ

The day you choose to become proactively engaged in winning the lost and discipling the saved, the war with the Enemy heats up. Go ahead, attend church, sing in the choir; attend religious programs. No problem, because you are of little if any threat to the Enemy. He’s more than happy to keep you busy with religious activities. As an evangelist and discipler, you are entering a spiritual battle with the arch enemy of your soul. So brace yourself for his vicious attacks.

In studying the life of Paul, as it relates to his efforts to win the lost and disciple the saved, two broad ideas emerge:

#1 Paul understood from experience that suffering was generic to being a laborer for Christ :

#2 Paul persevered through his suffering in bearing fruit, and challenged others to do the same:

No doubt Paul understood Jesus’ teaching, “… The seed on good soil stands for those with a noble and good heart, who hear the word, retain it, and by persevering produce a crop” (Lk. 8:15b). Clearly, Paul modeled and preached perseverance: “ We are hard pressed on every side, but not crushed; perplexed, but not in despair; persecuted, but not abandoned; struck down, but not destroyed. We always carry around in our body the death of Jesus, so that the life of Jesus may also be revealed in our body …Let nothing move you. Always give yourselves fully to the work of the Lord, because you know that your labor in the Lord is not in vain” (II Cor. 4:8-10; I Cor. 15:58). (See 2 Cor. 6:3-10; 12:15; 2 Tim. 4:6-8; Jms. 1:3, 4).

The marketplace is hostile to the values of the Lord Jesus. Little wonder that Jesus reminded us that “you cannot serve both God and Money” (Matt. 6:24b). So, when you choose to identify yourself with the Lord Jesus in the Machiavellian world of commerce, and you seek to evoke change in the people in that environment, expect the fulfillment of Jesus’ statement, “All men will hate you because of me…” (Matt. 10:22). (See 2 Tim. 3:12)

QUESTION : Are you up to the challenge?