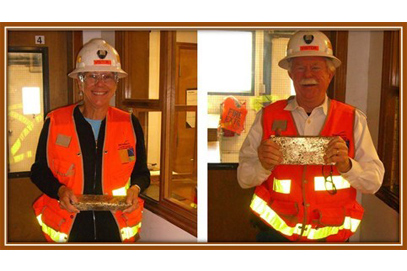 (Holding 2 Gold Bars they gave us to take home...)

Ok, I know what you are thinking, Dan is going to show us slides of one of his vacations. Well, kind of……….. Actually, I bid on this tour at a silent auction in 2011. My wife Jane and I waited almost 2 years. I called Newmont and asked if they would still honor the tour, since it had long expired. They were delighted to honor it, so Jane and I traveled to Carlin, NV via Elko. Without going into a lot of detail, it turned out to be the

most incredible tour we had ever been on. We spent time in the Leeville mine, about 2000-feet below the surface…… a city underground. We also traveled throughout the entire process……….. so amazing!

So what’s the point? I was on the phone this morning with a brother in Colorado and we were discussing our brothers and sisters in India and he brought up Isaiah Chapter 48. Here is just one of the verses:

“Behold, I have refined you, but not as silver; I have tested you in the furnace of affliction.” (Is 48:10)

When I reflected on this verse, I thought of those gold bars that Jane and I held. From the ore in the truck, they had been refined by numerous processes until they were about 99% pure. So it begins with us. When we say we want to faithfully serve God and that He can direct our paths, are you sure you know what you are saying? The vast majority of Christians resist the Gospel for fear of losing control of their lives. Although we think we are in control, we are not in control now and never will be. We just don’t want to submit. We don’t want to obey. I love what Walt Henrichsen said when he wrote a letter to the India pastors… Aug 2015. Here is an excerpt:

In all of life God perpetually tests His people. Life is filled with opposition and pain. God does this to prepare us for an eternity with Him. God never asks the believer to accomplish anything; He only asks that we be faithful in obeying Him as we respond to the tests He brings into our lives.

As we grow older, we experience diminished capacities – emotionally, physically, mentally, and spiritually. Our problem is that the testing’s of God are unrelenting. They never become easier. Thus, as Paul notes in Romans 5, they purify our hope by making the temporal less and less attractive, while causing us to long for heaven. In Philippians 1:21 Paul says that he would rather be dead than alive.
Life is hard. God designed life to be hard. For some life is harder than for others. The quality of our eternity is directly proportional to how we respond to the tests of God. Jesus said in Luke 12:48 that those of us greatly endowed with temporal blessings merely accrue greater accountability in the Day of Judgment.

So, my brothers and sisters in Christ, be encouraged. God is in complete control, and He is good. We need patience and perseverance until that day when He calls us home.

Your unworthy slave,
Walter A. Henrichsen

How are you going to respond when He tests you in the furnace of affliction? 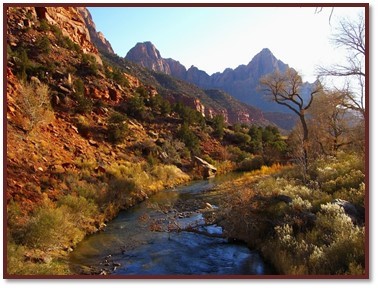 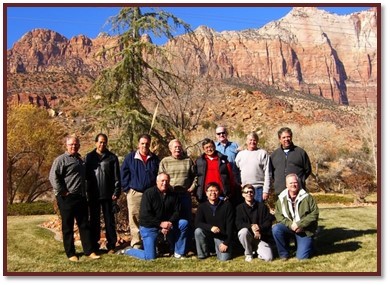 Spurgeon: “More Rebellious than the Sea”
Men: This short devotional is great!

“………………………Make it your ambition to be unknown—to be joyfully, contentedly unknown.”
3 Godly Ambitions for the Christian (1) Live a Quiet Life (2) Mind Your Own Business (3) Work Hard
A must read!

We Faint Not – Blue Book