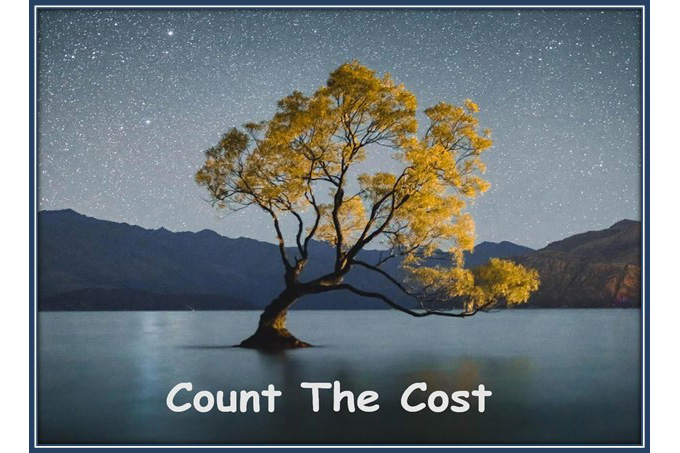 "If anyone wishes to come after Me, he must deny himself, and take up his cross daily and follow Me."

"From that time on, many of His disciples turned back and no longer walked with Him anymore."

Just getting to my computer after all the rain last night.  Even though we certainly need the rain in the Las Vegas area, when we get more than a few drops, it does create issues.  But certainly not like our brothers to the east and north of us where the precipitation is at record levels and the wettest year-long period in the U.S. since 1895.

Side note:  My wife and I were at a benefit for Autism last night.  Most of you know that Lee & Miltinnie Yih’s son, David, is autistic.  Before David was diagnosed, few if any people understood autism.  Today 1 in 59 children have a diagnosis of autism!  The increase in cases has been exponential.  I was talking to the head doctor of the Autism Center and asked her why such a huge increase over the years…………..  even though she said a lot, it was basically a “non-answer.”  I think of the Alejandro Corral Family that you have been praying for and when you ask the professionals why the increase in bipolar/schizophrenia, you will get a similar answer.  All this should give us great pause, drive us to our knees and hopefully keep our eyes on the eternal.  By the way, please continue to pray for Alejandro Jr and his family.

Do we really understand what Jesus was saying in the verses above?  I received a note from one of the India pastors the other day.  He stated the following:  “Because the cost of discipleship is high, Jesus told everyone to first count the cost.  And because of this cost, Jesus only ended up with a few deeply committed followers……….. BUT those few were enough to change the world!”  (Some of the verses he included: Luke 9:57-62, John 6:60-66, Mark 10:17-31).

Time is short men.  Be very prayerful to “Establish Your (God-given) Purpose.”

Men:  Please take some time over the weekend meditating on these two devotionals.
Question #1:  Are you ashamed – Day 132?
Question #2:  Can you identify with Day 133?

Every month I ask some of the men familiar with India to pray about writing a letter to the pastors and their churches.  Walt Henrichsen challenged me to do this years ago.  During All Night Prayer (held May 7th & 8th), it gives them a teaching to ponder and discuss.  They are so appreciative and hungry for these letters.  I wanted to share Jonathan Henrichsen’s letter he sent this month.  He will have Part II next month.  Please take a few minutes to read this…………….

It has been more than ten years since I had the joy of visiting you and seeing firsthand the way God is using you and working through you in mighty ways for His Kingdom. I thank God for you, for your witness and your example. I lift you up before Him, asking for your safety, your encouragement and your continuation in the good work that He has started.

What a privilege for me to get to write to you all as you are gathered together for a night of prayer. I would like to share with you some thoughts on my study of the book of Jonah, and I am going to split it into two letters – one for tonight and one for a night in the future.

I am Jonah in so many ways. So many of his reactions and struggles are the same ways that I tend to react and struggle, so these are some of the common problems from Jonah that we followers of Christ tend to have with God in our walks. Then, I have some thoughts on what we can learn about God from the book in response to those problems.

In ch 1:2-3, God tells Jonah to go to Nineveh, and Jonah doesn’t want to go. It isn’t until ch 4 that we learn a little more about Jonah’s problem. In 4:2, he says that it was to forestall God’s forgiveness of Nineveh that he fled, but we are not told why he didn’t want that. It could be because Assyria was Israel’s enemy, and Jonah wanted its capital destroyed. It could be that, as a prophet, Jonah’s reputation would suffer if his prophecy of destruction didn’t happen. In any event, Jonah had an agenda that was different from God’s.

I grew up hearing some very basic truths repeated over and over again, and some of you may have heard this too: A genuine commitment to obedience is only revealed in those situations where I really don’t want to do it.

Sometimes God will pursue us in our rebellion, as He did with Jonah. Most often, He won’t. As a general rule, I think we can expect God to stand back and allow us to run away spiritually.

On a side note, a couple of years ago, my mother gave me my dad’s copy of the Tanakh, the Jewish scriptures, which had a lot of notes written in the margins. So, of course, I immediately turned to see if he had any notes from Jonah. Next to verse three, he had written: “Why didn’t Jonah just stay in Israel? That’s what we would do.” I thought that was a great insight. We would not try and flee the presence of the Lord. Even if you think of running way figuratively, we are much more likely to just carry on with going to church and coming to prayer meetings! I am much more likely to think that my rebellion will make no meaningful difference in my spiritual life and just go on with business as usual.

Don’t you find that it’s much easier to thank and worship God when things are going well? It’s just like obedience – the true test of our faith comes in times of hardship. Sickness. The loss of a job. The death of a loved one. I’m more likely to get mad at God in those situations. Does hardship lead you to a crisis of faith? It will if you don’t embrace the lesson of 1 Peter 1:6-7: In this you greatly rejoice, even though now for a little while, if necessary, you have been distressed by various trials, so that the proof of your faith, being more precious than gold which is perishable, even though tested by fire, may be found to result in praise and glory and honor at the revelation of Jesus Christ.

First, we learn that God is not a passive observer of what’s going on in the world. Moreover, He doesn’t just allow events and utilize them to further His purposes. God is the one hurling the storms in your life. He is, in all things, absolutely sovereign.

Second, we learn that trials and hardship are the tools that He uses to refine us in preparation for eternity. He is not cruel. He is not arbitrary. He’s at work, and His work has a purpose that will turn out well for us. God is Good.

Consider the crew on Jonah’s boat. They are terrified. They almost die. They lose their entire cargo, which may have meant financial ruin. And they are forced to throw a man overboard, which (understandably) they really, really didn’t want to do! Jonah is asleep. He isn’t terrified. It isn’t his cargo. These people are innocent bystanders. It really doesn’t seem fair.

Note that the crew responds to the storm by praying. I find this such an interesting snapshot of humanity. Hardship and terror lead the believer to become angry with God, but they often lead the unbeliever to his knees in search of divine intervention.

As followers of Christ, we better be ready to answer the question: If there is a God and He’s as great as you say He is, why does He allow X? Fill in the blank. Cancer. War. Famine. Floods.

I’m not going to answer that question for you in this letter. But I will note that we learn something about God here. Sometimes God allows us to see His redemptive purposes. In the case of the crew, this storm and the near loss of their lives lead the crew to fear God, offer sacrifices and make vows to Him (1:17). When we meet them in eternity, I expect them to say that that storm was the best thing that ever happened to them. Sometimes God gives us the happy ending. However, most of the time He doesn’t. He doesn’t share with us His design in taking the lives of hundreds of people in Kerala last year. Or the loss of homes and livelihoods of thousands more. God very rarely allows us to understand His purposes in specific situations.

More next time! God’s grace and peace to all of you.

My wife sent me this earlier this morning.  GREAT Quote!

“That only happened once, and He volunteered.”