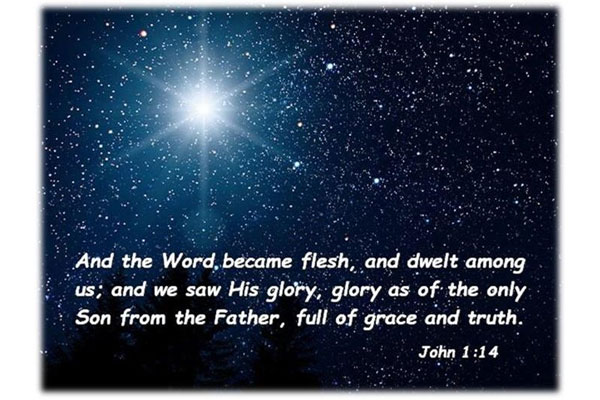 How much thought have you REALLY given these two words?

I pray you have a “Christ-filled” Christmas today as we reflect on what really happened over 2000 years ago.  I’ve been thinking (that’s dangerous) about those two words:  Merry Christmas.  “Christ-mas” was used as one word beginning in the 14th century.  Of course “Christ” is from the Greek word  χριστός (christos) meaning “the anointed” which was synonymous with the Hebrew word mashiah or Messiah (and of course our Jewish brethren are still waiting for their messiah).  Much has been written about the etymology of the word Christ, but for now I want to focus on the word Merry used together with Christmas.  By the way,  Christ is not Jesus’ last name!

I was texting with a brother yesterday about this.  Merry is exactly what you think it means (cheerful, high-spirited, lively, gaiety, etc).  We have become way to familiar with the words “Merry Christmas.”  Most people think of the obvious like, getting together with family and friends, delicious food, gift-giving, going to church, festive music and maybe even delivering some gift baskets to the less fortunate.  And of course those are all good things, but what about Jesus?

When He arrived back to His home town of Nazareth and headed over to the  temple, we read these words from Luke 4:

And He came to Nazareth, where He had been brought up; and as was His custom, He entered the synagogue on the Sabbath, and stood up to read.  And the scroll of Isaiah the prophet was handed to Him. And He unrolled the scroll and found the place where it was written:

“The Spirit of the Lord is upon Me, because He anointed Me to bring good news to the poor. He has sent Me to proclaim release to captives, and recovery of sight to the blind, to set free those who are oppressed, to proclaim the favorable year of the Lord.”

And He rolled up the scroll, gave it back to the attendant, and sat down; and the eyes of all the people in the synagogue were intently directed at Him. Now He began to say to them, “Today this Scripture has been fulfilled in your hearing.”  And all the people were speaking well of Him, and admiring the gracious words which were coming from His lips; and yet they were saying, “Is this not Joseph’s son?” ….. And He said, “Truly I say to you, no prophet is welcome in his hometown.”

Even though Jesus spent 30 years of his life in Nazareth, the people missed Christmas because they only saw Him as Joseph’s son, a carpenter’s kid.  Nothing special at all….. and if we keep reading we see that the people,

“….. got up and drove Him out of the city, and brought Him to the crest of the hill on which their city had been built, so that they could throw Him down from the cliff.  But He passed through their midst and went on His way.”  (Luke 4:29-30)

What’s that old saying, “Familiarity breeds contempt.”   How many times have I run into guys that were brought up in a Christian home and hardly ever mention the name of Jesus.  It doesn’t cross their mind that He is the King of kings and the Lord of lords.  In some denominations, you hear a lot about “Baby Jesus” again and again.  News Alert:  He grew up!  I don’t know about you, but when I think about “Merry” Christmas, I have a lot to be “merry” about.  Jesus went through the most horrendous unimaginable agony and rejection of His Father on that Cross to eternally save a sinful scheming swindler like me!  When was the last time you talked to someone about this King of Glory.  If not, maybe you need to reflect on your own walk with Jesus.

I’ve shared this before, but you might pass this on to your family and friends this Christmas Day………..

The Great Conjunction:  I hope most of you had a chance to acquaint yourself with the this phenomenon that hasn’t’ occurred in 800 years (See my last email 12/18/20).  On Monday I set up my 1988 Celestron Telescope, which still works great.  Unfortunately to take a good photo with my smart phone, I needed a special attachment for the lens, so I had to hold my phone very carefully to attempt to  get a decent shot.  These photos will give you a better idea: 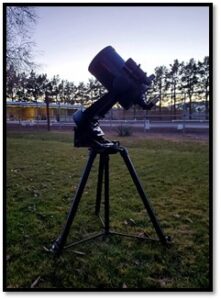 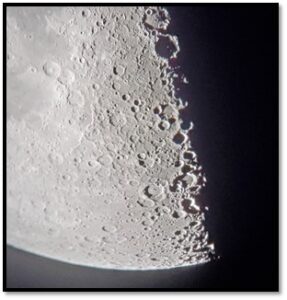 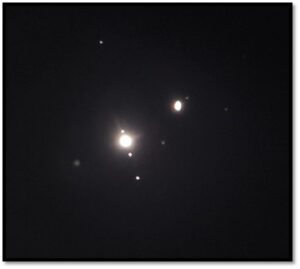 After I set up my telescope, I took a photo of the moon.  Then as it got dark, I snapped this photo of the Jupiter/Saturn conjunction.  You can see some of Jupiter’s moons.  Looking through the lens w/o the camera, you could easily see Saturn’s rings.

So what about the “Star of Bethlehem.”  If you are interested, I think Ken Boa has the best theory of what took place.  Ken received his degree in Astronomy from Case Western and wrote his master’s thesis from Dallas Theological on “The Return of the Star of Bethlehem” (I started reading it and realized it was 150 pages long….. maybe later).  Here is a very short write up that is well done:  **  https://kenboa.org/science/return-bethlehem-star/  **

Note:  On Wednesday night I re-watched “Pluto and Beyond” on NOVA-PBS:  https://www.pbs.org/wgbh/nova/video/pluto-and-beyond/

A very intelligent astronomer/scientist, Joel Parker, at the end of the program made the following statement, “Going into the unknown is fundamentally important for the human spirit from every aspect – from scientific, to artistic,  to just wondering WHERE WE CAME FROM and WHY WE’RE HERE.”  Except for the Grace of God, I could have very well made that same comment!  How sad that so many in scientific academia are blinded to the creation by the Master Watchmaker!

“He was in the world, and the world came into being through Him, and yet the world did not know Him.
He came to His own, and His own people did not accept Him.
But as many as received Him, to them He gave the right to become children of God,
to those who believe in His name”
(John 1:10-12)

When Christ is Lifted Up
William McCurine

“The vast majority of us are dragged kicking and screaming to the cross. It is a life and death struggle. We resist with every ounce of strength and willpower we have until we are helpless to do anything but submit. The natural man hates the cross. The natural man turns his back to the cross, ignores it, runs away from it. Only when the spirit of God drags a man to the cross will he see it and come under its power.”  (Quoted from the message)

Men:  You will not want to miss reading the attached message by our brother, Bill McCurine. 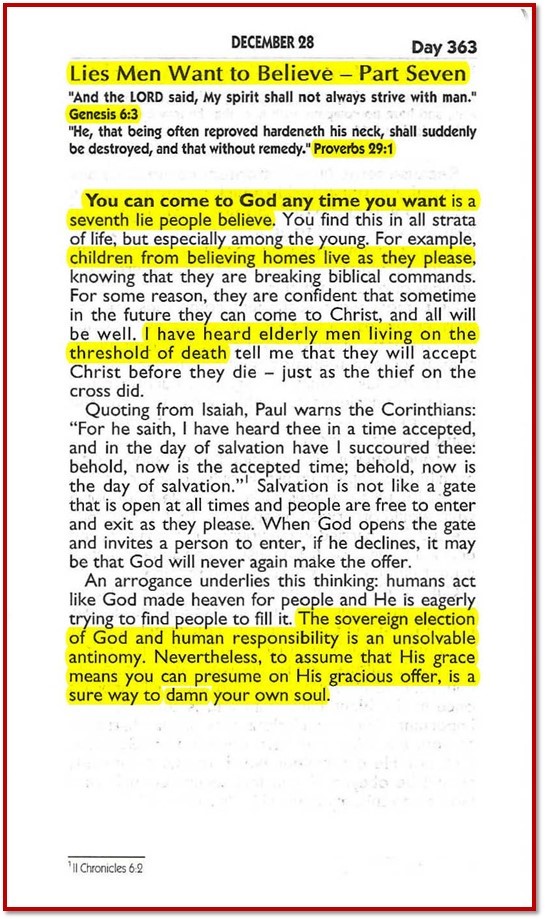 Audio Message of the Week:

Faith and Claiming the Promises – By Walt Henrichsen (60min)

This joke by Walt really made a great point:  The Chicken and the Pig were walking through the field and they come to a large sign that says Ham and Eggs at Joe’s Grill.  The chicken turned to the pig and said, “Look at that, equal billing.”  The pig then says, “Yah, for you it’s participation, but for me it’s total commitment.”

That’s what God wants from us….  Total commitment, not just participation.

Men:  This is a great message.  Not only make time for it, but take our your notebook.

Video of the Week:

This was performed last December 2019.  My wife and I watched it.  Impressive indeed.

Here is a condensed excerpt about George Frideric Handel from one of the staff at the Billy Graham Library:

Handel’s Messiah. It first premiered in Dublin, Ireland in 1742.  George Frideric Handel was born in Germany. He was a large, awkward man, rough, and hot-tempered that earned him the nickname “The Great Bear.”  Handel was also deeply religious. Divinely inspired, this two-and-a-half hour composition took less than 25 days to write!  When it was completed, he sobbed and said, “I think that I did see all heaven before me, and the great God Himself!” He was 56.   Handel utilized vast portions of Scripture from 14 books of the Bible, including “For unto us a child is born…and the government shall be upon His shoulders…His name shall be called Wonderful, Counselor, the Mighty God…the Prince of Peace.”  Beethoven said, “Handel was the greatest composer that ever lived.” On his grave at Westminster Abbey is “I Know That My Redeemer Liveth.”  What would Christmas be without Handel’s Messiah and the Hallelujah Chorus?  Hallelujah to the King of Kings.

Profound quote by J.I. Packer
It reminded me of Isaiah 53:10 “But it was the Lord’s good plan to crush Him (Jesus), causing Him grief…….”
We have hope, because it was a “good plan.” 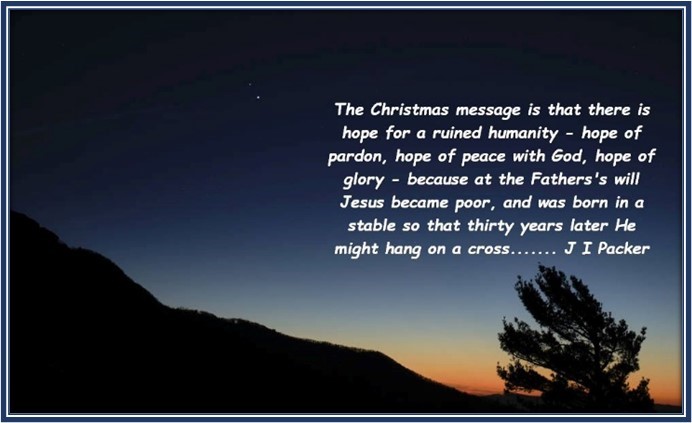